It was shortly after the Reddit-fueled, meme stock saga that the silver market landed squarely in the cross-hairs of the online community. However, the supposed silver squeeze and the one that followed have been rather ineffective when compared to short squeezes on Gamestop (GME) and the like. This article takes a look at the events surrounding the silver squeeze and some of the difficulties of shorting the silver market. 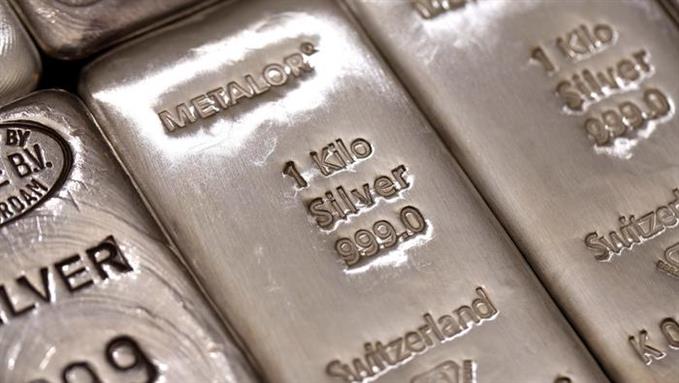 In January 2021, a finance-focused community under the name ‘WallStreetBets’, hosted on the popular online forum, Reddit caused quite a stir as news broke of their intentions to bid up the prices of a number of targeted meme stocks in an effort to achieve a short squeeze.

Thereafter, the WallStreetBets community decided to turn their sites towards the silver market in an attempt to raise the price of a market that has long been rumored to be intentionally suppressing prices.

The first and second silver squeezes were said to have been conducted via the world’s largest silver Exchange Traded Fund (ETF), iShares Silver Trust, which has a $15.97 billion market cap at the time of writing. The idea was to buy into the ETF which would force the fund to allocate new shares and purchase silver to back them. A sharp surge in interest in the ETF would lead to a sudden increase in the demand for silver and likely result in a sizeable increase in the price for the commodity.

A staggering $1 billion flowed into iShares Silver Trust the Friday before the planned silver squeeze, forcing it to purchase an additional 34 million ounces of physical silver to leave the total stockpile at just over 600 million ounces.

The candlestick chart below highlights the gap up in the price of the fund with an almost immediate retracement bringing prices back to where they were before the massive inflows. The surge in volume is circled in red, while the average true range (ATR) indicator – which depicts an average of daily price movement – also peaked.

The superimposed orange line depicts the price of the continuous silver futures contract, which witnessed a spike but failed to raise prices significantly, as was expected. The price of silver rose less than $4 between Friday the 29th of January and Monday the 1st of February. Thereafter, for the remainder of February prices actually dropped below the spike high but remained above the pre-squeeze levels. 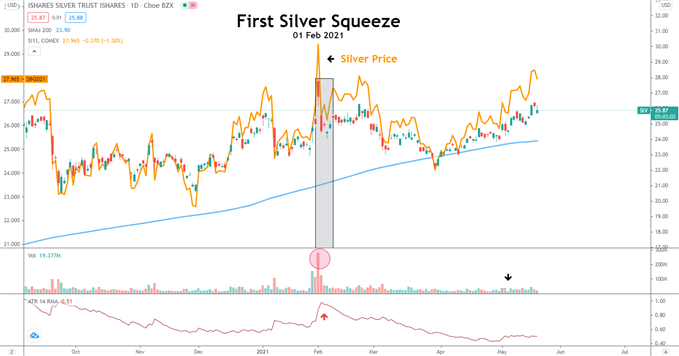 The second silver squeeze or ‘silver squeeze 2.0’ took place on May the 1st – although this fell on a Saturday so much of the price action was captured on May the 3rd. Looking at the chart below this attempt had a more muted effect initially, as price action jumped less than it did the first time around and witnessed significantly lower volume, too. 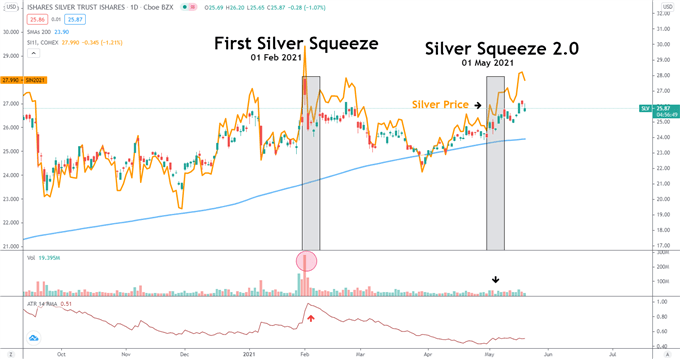 The second silver squeeze seems to have maintained somewhat of a choppy rise in silver prices as opposed to a sharp parabolic move which is usually associated with a squeeze. Furthermore, some of the recent silver price increase may very well be attributed to the depreciation of the US dollar (inverse relationship) as can be seen in the overlay below: 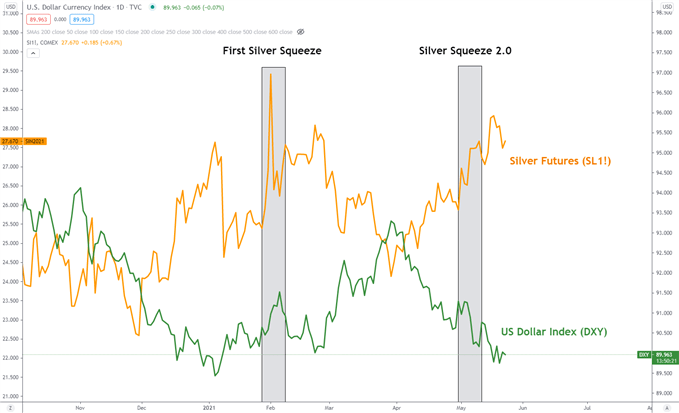 Shortly after the news of a possible silver squeeze there were many posts on the subreddit denouncing this move as members sought to distance themselves from the idea. Despite having a consistent motive to the previous short squeezes - a protest against short-selling hedge funds - there are a number of issues when it comes to shorting the silver market.

As such, this has led some to pursue the idea that this may have been a diversion ploy, orchestrated by actual ‘Wall Street’ to derail the momentum and cohesiveness of the online trading community.

Reasons why a Forced Silver Squeeze is Unlikely: