The upcoming earnings season could provide the stock market another boost as analysts forecasted a solid period of growth. This may pave the way for Nasdaq 100 to attempt higher highs in the weeks to come.

Crude oil prices pulled back from two-and-half year highs ahead of this week’s OPEC+ meeting, in which the oil cartel is expected to announce a production hike plan for August. Weaker oil prices may dampen the appeal of commodity-linked currencies such as the Canadian Dollar and Norwegian Krone.

Gold prices continued to consolidated in a range between $1,760 – $1,795, forming a “Bearish Pennant” pattern. It suggests further price weakness is likely if the yellow metal breaks below the rising trendline.

Asia-Pacific markets look set to trade mixed today. Futures in Japan, mainland China, Australia, South Korea, Singapore and Thailand are in the red, whereas those in Hong Kong, Taiwan and India are in the green. Viral resurgence in the UK and Australia may weigh on sentiment as countries tightened travel bans.

The Nikkei 225 index is struggling to breach the 100-day SMA line, which remains a key resistance level in the near term. Japan removed the state-of-emergency measures in the Tokyo and Osaka regions last week. Eased Covid-related restrictions could pave the way for the index to aim higher levels, while a resilient Japanese currency may cap stocks’ upside potential.

The Nasdaq 100 index breached a key resistance level of 14,013, thus opening the door for further upside potential. Prices may aim for higher highs in the days to come as the overall trend remains bullish-biased. The next major resistance can be found at 14,950 – the 261.8% Fibonacci extension. The previous resistance (14,013) has now become an immediate support. The RSI oscillator penetrated into the 70 mark, suggesting that prices may be temporarily overbought and vulnerable to a technical pullback. 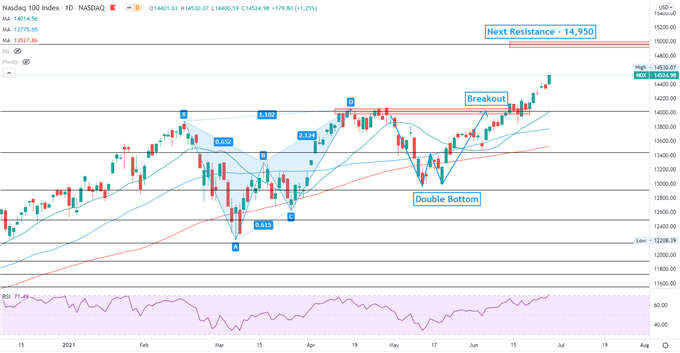 The Nikkei 225 index is attempting to breach the 100-day SMA line, which is an immediate resistance level. The index has also likely broken the ceiling of a “Descending Channel” and thus opened the door for further upside potential. The next key resistance level can be found at 30,200- the 127.2% Fibonacci extension and where the “Triple Top” resistance lies. 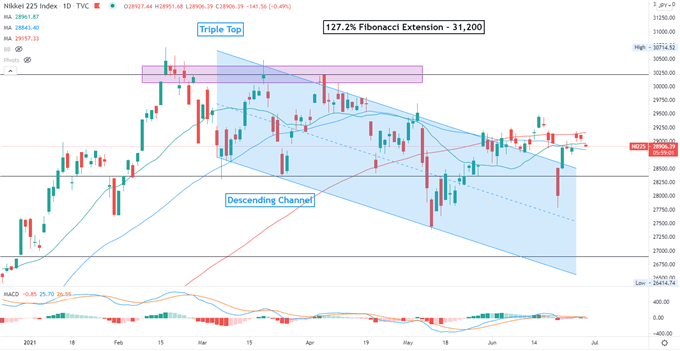 The ASX 200 index pulled back from its all-time highs this week and entered a technical correction. Prices have likely formed a “Bull Flag” pattern, which hints at further upside potential after a period of consolidation. Immediate support levels can be found at the 20-day SMA line (7,290) and then 7,200 – the 127.2% Fibonacci extension. The overall bullish trend remains intact as suggested by the upward-sloped SMA lines. 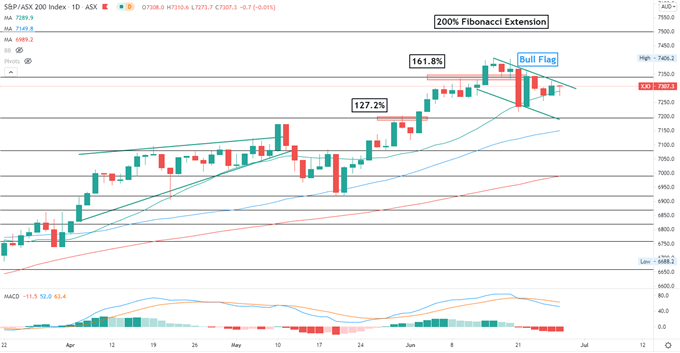