BOTTOM LINE: As widely expected the Bank of England maintained current monetary policy in a 9-0 vote with the interest rate left at 0.1%. Once again, Andy Haldane, was the only hawkish dissenter on QE, voting to cut the APF target by GBP 50bln. As a reminder, Haldane will leave his post as Chief Economist after this meeting. As such, given that markets had been positioned for a hawkish surprise, following the recent FOMC meeting with reports doing the rounds that the BoE should scrap QE (The Time Shadow MPC) adding to the crowded long GBP, an 8-1 vote split of QE was subsequently a disappointment for GBP bulls, prompting cable to fall to session lows.

GROWTH: Bank staffs upgraded the level of Q2 GDP by around 1.5ppts since the May report and thus output in June is expected to be around 2.5% below its pre-Covid level. This is largely a reflection of the recent swathes of firm data since the May meeting.

INFLATION: In light of inflation rising above the BoE’s target sooner than expected, the BoE now see inflation likely exceeding 3% (previously saw a peak of 2.5%) for a “temporary” period.

MONETARY POLICY: While central bank’s have begun to shift in a more hawkish manner (most notably the FOMC), the BoE highlighted that policy should lean strongly against downside risks to the outlook and ensure that the recovery was not undermined by a “premature tightening in monetary conditions”. The BoE pushing back against the view that the Bank could look to tighten policy sooner rather than later.

MPC BALANCE: As the only hawk leaves the BoE having failed to convince other members to join his hawkish dissent, focus will begin to grow on the balance of the BoE going forward and at this present time, a replacement has not been announced for Haldane. 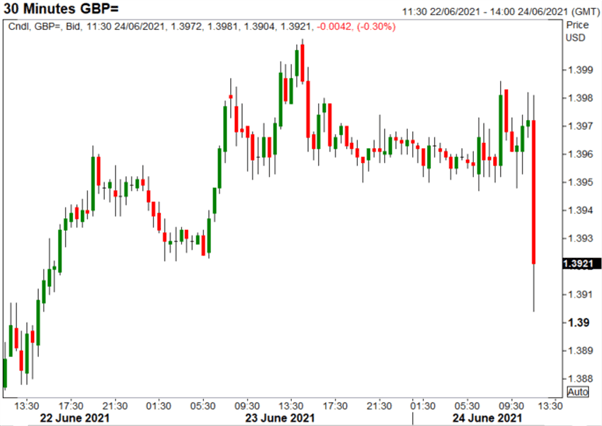 Find Out More on Trading GBP/USD With Our Comprehensive Guide