Crude oil prices extended higher during Wednesday’s APAC session, trading near two-and-half year highs. Oil prices were riding the tailwinds of a strong recovery outlook as OPEC+ was reported to consider easing production cuts further in August to meet rising fuel demand. The market appears to be confident about the outlook as a strong economic recovery in the US and Europe may warrant further output hikes amid tightened supply conditions.

The oil cartel and its allies have slashed production by more than 5 million bpd since the outbreak of the Covid-19 as the pandemic hurt global energy demand badly. During an April meeting, OPEC+ decided to gradually lift output cuts by 2.15 million bpd from May to July as demand rebounded sharply (chart below). The rollout of Covid-19 vaccines globally helped to bring down the number of infections in developed countries, enabling business and travel activity to normalize rapidly.

OPEC+ Plan to Lift Production Curbs during May- July 2021

Yet, OPEC production remains significantly below the pre-Covid perch despite surging prices (chart below). Total output hovered at around 25 million bpd for the first six months of this year, compared to a five-year average of 30 million bpd. Meanwhile, oil prices have more than doubled since November and are trading at two-and-half year highs. This suggests that ample room remains for the oil cartel to gear up output in the months to come. They need to calibrate the pace and magnitude of the hikes however, to prevent hurting prices. This puts the next OPEC+ meeting scheduled on July 1st under the spotlight. 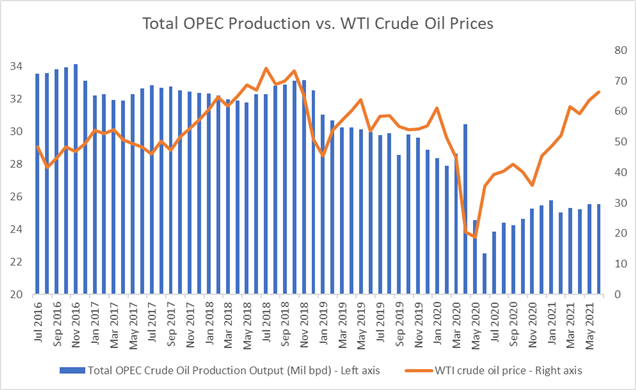 The American Petroleum Institute (API) reported a 7.20-million-barrel draw in crude inventories for the week ending June 18th, compared to a 3.50-million-barrel decline forecast. This also marked the fifth consecutive weekly decline in stockpiles, hinting at tightened market conditions as refiners geared up capacity to meet demand for the summer driving season. A rapid fall in crude inventories underpinned market confidence and may support prices to challenge higher highs.

The Energy Information Administration (EIA) will publish its weekly petroleum status report later today, in which traders will assess the weekly changes in both crude and gasoline fuel inventories for clues about the underlying fuel demand. A larger-than-expected fall in stockpiles would likely strengthen prices, whereas a smaller draw or a rise may lead to the reverse. 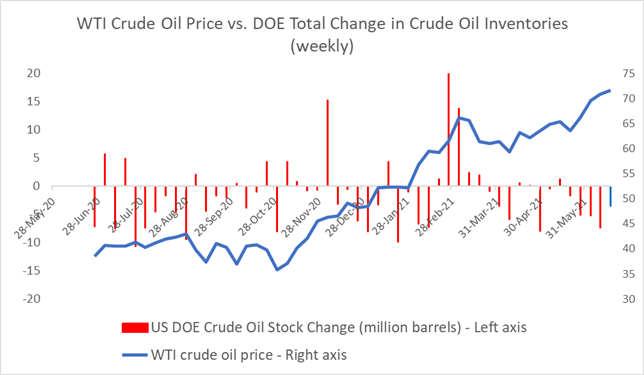 Technically, WTI is challenging a key resistance level of $73.5 (268.2% Fibonacci extension), breaching which would likely open the door for further upside potential. The overall trend remains bullish-biased, albeit selling pressures may be seen at around the resistance level. An immediate support can be found at $70.0 – a psychological level. The MACD indicator is trending higher, suggesting that bullish momentum remains in charge. 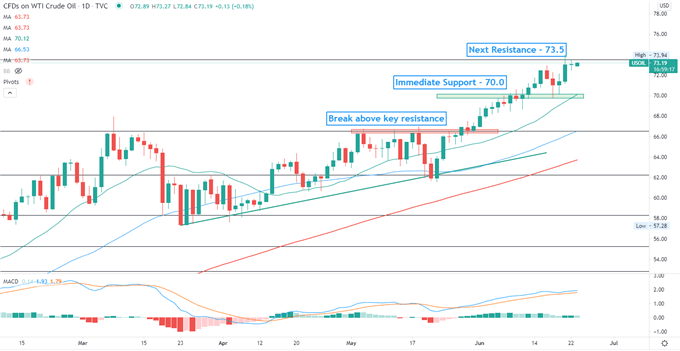