Last week the South African rand did not react well to the Federal Reserve’s dot plot adjustment message. This week, the local currency pushed back attempting to recover lost gains. The result is apparent from the image chart below which shows the rand slipping from the best performing currency against the dollar in 2021 to third place behind the Ukrainian hryvnia and Canadian dollar respectively – a title it has held for most of 2021. 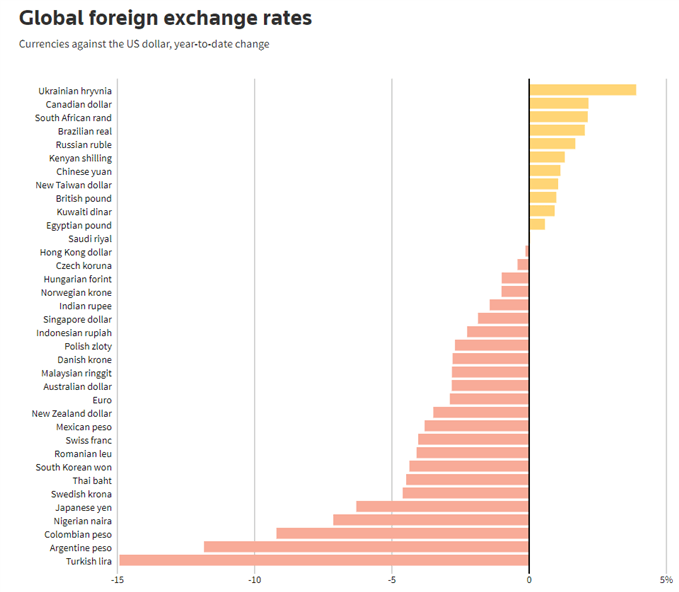 With U.S. inflation concerns comparatively dissipating, South African linked commodity prices such as iron ore, platinum and gold have been significantly declining post-FOMC which has endured this week. These weaker commodity prices have a negative impact on rand strength which could hinder further rand gains.

Following on with the inflation discussion, South African CPI (May) will be scheduled on 23, June 21, 2021 at an estimated figure at 5.2% up from 4.4% prior (see calendar below). In addition, key risk announcements from the U.S. will be watched carefully with several high impact events expected throughout the week. 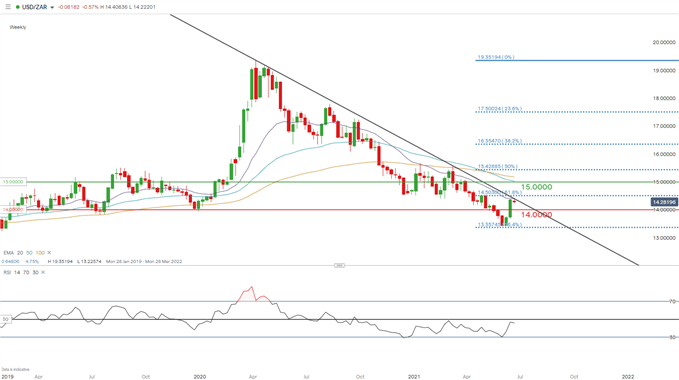 The weekly USD/ZAR chart above gives a clear long-term picture of the strong downtrend beginning in 2020. Since then, a formidable trendline resistance (black) has formed which is being tested this week. The 20-day EMA (purple) coincides with this level along with the 61.8% Fibonacci zone at 14.5030. A confirmation weekly close above these levels could spark a bullish run toward the 15.0000 psychological level. 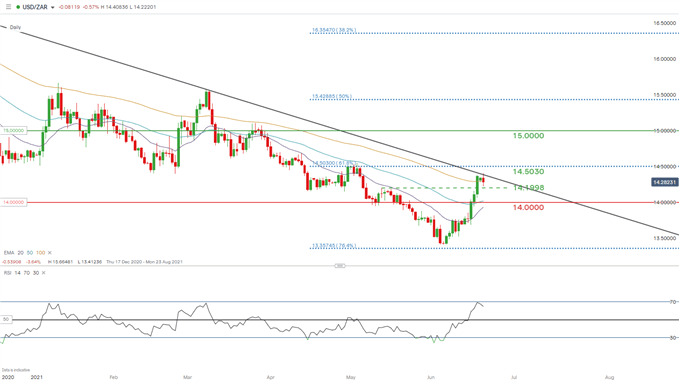 Centering on the daily chart, it is evident just how substantial last weeks rally was by the steep accumulation of daily candles. Breaking through several key levels, USD/ZAR has found resistance at the aforementioned weekly trendline (black). On the daily chart, the 100-day EMA (yellow) is now providing short-term support.

The Relative Strength Index (RSI) is also vastly different from previous analysis which has swiftly risen to the overbought region. This could point to a near-term pullback by rand bulls, which will see bears looking for initial support at the previous swing high at 14.1998, after which 14.0000 area of confluence will be back in focus.

Bulls will be waiting for confirmation of a trendline break to push toward 14.5000 and subsequently 15.0000.