Iran’s election of ultra-conservative leader Ebrahim Raisi as president may further complicated the prospects of future nuclear talks. Raisi was sanctioned by the US government before being elected, and he is known as a hard-liner on foreign policy. This may raise the bar for both Washington and Tehran to reach a consensus on removing economic sanctions and returning to the 2015 nuclear accord.

The outlook for energy demand remains robust as the economic recovery gains momentum in the US and Europe, although parts of Asia are still suffering from Covid-19 outbreaks. US daily air travelers surpassed 2 million for the last two weeks, underscoring strong demand for fuel. The recent fall in US commercial crude inventories also strengthened this prospect (chart below). 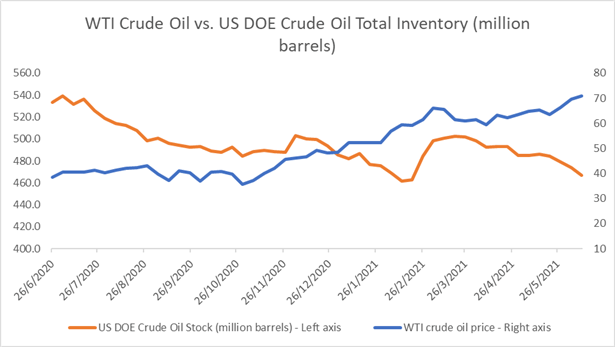 Across the Pacific, Japan removed the state of emergency in Tokyo, Osaka and several other prefectures this week as the country prepares for the upcoming Olympics. China’s southern economic hub of Guangdong extended travel restrictions however, after new coronavirus cases were reported over the weekend.

Traders may also keep an eye on the strengthening US Dollar, which may exert downward pressure on commodity prices and limit the upside potential for oil. This may be attributed to tapering fears following last week’s FOMC meeting. Fed officials appeared to be increasingly concerned about inflationary pressures and some of them see rate hikes as early as in late-2022. Therefore, this Friday’s core PCE price index data will be closely watched by market participants.

Technically, WTI breached above a psychological resistance of 70.00 and thus opened the door for further upside potential. The next key resistance can be found at around $73.50 – the 261.8% Fibonacci extension. The overall trend remains bullish-biased as suggested by the upward sloped SMA lines. A bearish MACD indicator however, suggests that upward momentum may be fading and some price weakness may be seen before attempting higher highs. 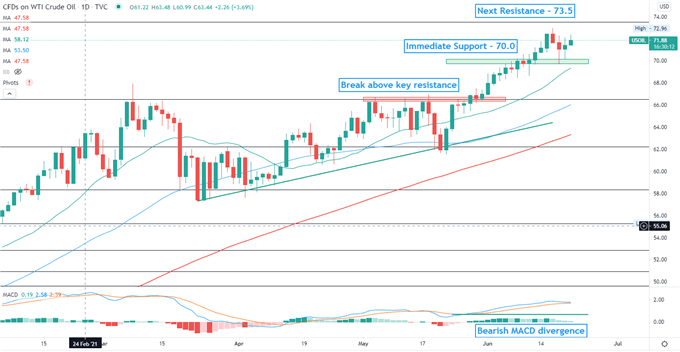