After the hawkish Fed meeting surprise on Wednesday this past week, the Rand has fallen against majors and continuing the depreciation from last week. The U.S. dollar (as of this writing) has made strongest weekly change since September 2020 according to the U.S. Dollar Index (DXY) chart.

This weakness has been a common theme across the majority of its Emerging Market (EM) currency peers. The carry trade scenario has been impaired for the time being, which has influenced much of the ZAR’s recent gains. However, I do believe dollar strength may plateau in the short-term which could keep the rand relatively strong before the much anticipated Jackson Hole symposium in late August.

On the local front, South Africa has been moved to a stricter lockdown bracket which is likely to fetter local business activity. COVID-19 cases are rising as we enter a possible third wave which does not aid the local currency but from historical evidence we know this will only have a marginal impact as global factors remain the principal motivator behind the Rand. 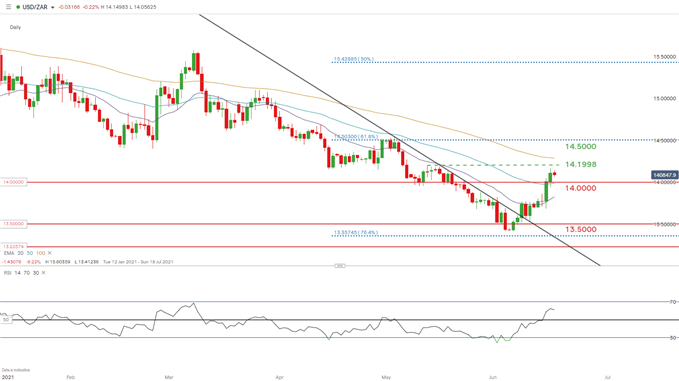 Bears will be looking for a close below 14.0000 after which the 20-day EMA should provide initial support. 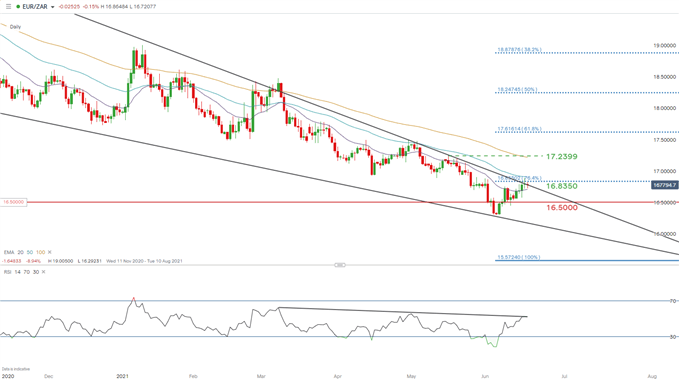 EUR/ZAR looks to be trading within a long-term falling wedge pattern which could point to an extended upside should prices confirm a close above wedge resistance. Wedge resistance overlaps with the 76.4% Fibonacci retracement level at 16.8350. Therefore, a push above this horizontal zone could reveal May swing highs at 17.2399.

The Relative Strength Index (RSI) looks to be in sync with wedge resistance so a break above RSI resistance (black) could spark a bullish upturn.

A lack of bullish support could also send the pair back within the falling wedge pattern with 16.5000 serving as initial support. 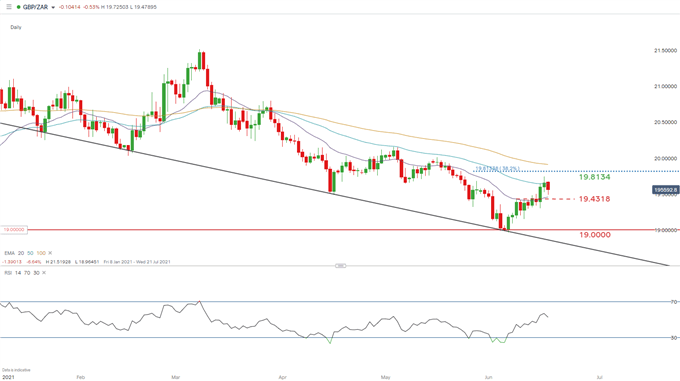 Pound Sterling has given some of its weekly gains back to the ZAR this morning after weaker than expected retail sales data; yet still up overall for the week. GBP/ZAR seems to have found resistance at the 50-day EMA with bulls looking to move above resistance toward the 38.2% Fibonacci at 19.8134.

Further downside could see the June 9 swing high (19.4318) as a support target with the 20-day EMA roughly around the same level.