Brazilian Real Outlook: FOMC, COPOM Could Set the Tone for USD/BRL Near Term

Most read:The Most Volatile Currency Pairs and How to Trade Them

The next couple of days could bring strong volatility for the Brazilian real due to two high-impact events on the economic calendar docket. First off, tomorrow (Wednesday) at 2:00 pm ET, the Federal Reserve will announce its fourth monetary policy decision of the year. No changes to interest rates or the quantitative easing program are anticipated, but the central bank may offer clues about its next steps through its forward guidance and the updated “summary of economic projections”.

Some expectations suggest that FOMC could bring forward its tightening cycle and pencil in a rate increase for 2023 in its dot-plot, but delay to later meetings a comprehensive and full discussion of reducing asset purchases. An scenario in which the median dot is nudged higher for 2023 and greater willingness to initiate the tapering debate is signaled (preliminary talks perhaps) could be positive for the US dollar and trigger a transitory move higher, especially against low-yielding currencies.

On the other hand, if the Fed fails to shift a rate hike to 2023 and avoids talking about stimulus withdrawal altogether, arguing that the economy has not made substantial progress towards its goals and that inflationary pressures are transient, the greenback could lurch lower, driving the USD/BRL towards its 2021 lows.

After the FOMC meeting, investors' attention will turn to the Central Bank of Brazil (BCB). The institution’s rate-setting committee known as “COPOM” will publish its monetary policy decision at 5:00 pm ET on the same day. According to market consensus, the BCB will raise its SELIC rate by 75 basis points to 4.25%, following two hikes of the same magnitude at its last two policy meetings. As a reminder, the bank, chaired by Roberto Campos Neto, began lifting borrowing costs from a record low of 2.00% in March to contain rising inflationary pressures driven by higher commodity prices and pass-through BRL depreciation. The BCB is targeting an inflation rate of 3.75% in 2021, with a variability range of plus/minus 1.5%, but in May the headline CPI hit 8.06% y/y, its highest level in almost five years.

With inflation skewed to the upside and economic growth broadly stabilizing, the COPOM is likely to retain a hawkish stance and may even suggest that a "full policy normalization" is warranted rather than a “partial normalization” as indicated in the previous statement. A shift in narrative (i.e. a more hawkish forward guidance) could point to a more aggressive tightening cycle and thus be seen as a bullish catalyst for the Brazilian real in the FX market. As a side note, investors currently expect the SELIC rate to end the year at 6.25%, significantly above the Fed's benchmark rate anchored at zero percent. This aggressive hiking sequence may generate enough yield to compensate investors for taking on more domestic risk stemming from the country’s weak fiscal position and the still challenging public health crisis. 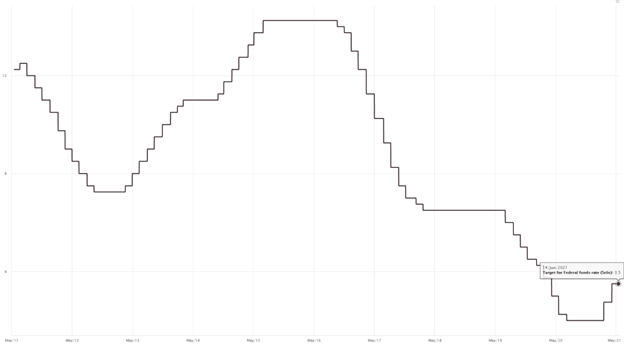 All in all, monetary policy divergence between the Fed and BCB may pave the way for more BRL appreciation over the next couple of months (high carry is a positive factor for BRL). Although there could be intermittent spikes in USD/BRL price action, the underlying trend appears bearish. In this context, the pair could head lower and break below the 5.00 psychological mark in the near term.

To learn more about carry trade, check out DailyFX education

If the bearish momentum seen since late March intensifies, USD/BRL could fall further and head towards a key support area near the 5.0000 mark, where the December 2020 and June 2021 lows align with the 50% Fib retracement of last year's January/May rally. Should sellers push price action below this important threshold, the June 2020 swing low near 4.8155 will come into play.

Alternatively, if USD/BRL fails to break below the 5.0000 psychological level and we see a bounce, price could start rising towards a resistance area in the 5.1500 vicinity (R1). A move above this technical barrier could pave the way for a rally towards 5.2000 (R2).