US Dollar Analysis: Hot Inflation and a Potential Infrastructure Bill - More Weakness Ahead?

A bipartisan group of Senators agreed on a $1.2 trillion infrastructure package Thursday evening, paving the way for a concrete bill to hit the floors of Congressional chambers in the coming days. A group of 10 Senate Democrats and Republicans reached an agreement on Wednesday, one that is “fully funded” and will not include any tax increases. The bill is rumored to cost $1.2 trillion over 8 years, with $579 billion in new spending over the first 5 years. The agreement is a massive step forward following the collapsed talks between President Biden and GOP Senator Shelley Moore Capito. The next battle for the bipartisan group is to appease party leaders, but opposition is expected.

The news of increased fiscal spending will be applauded at the Federal Reserve, as Chairman Jerome Powell has highlighted the need for increased fiscal support to reignite the economy following the pandemic. Any sort of infrastructure bill will contain funding that will ultimately help the Fed reach its employment targets coming out of the pandemic. It is expected that the bill would put billions of dollars into workforce development and retraining programs that help labor market participants adapt to the technology of the 21st century. Not to mention, any bill would generate tens, potentially hundreds of thousands of jobs in areas such as transportation, construction, and manufacturing.

Additional fiscal spending on the scale of $1.2 trillion may have USD bears licking their lips. However, as the economy begins to reopen and jobs rebound, upward pressure on the Greenback may persist. The Dollar appears to be caught between strong economic data and a lethal combination of QE and hot inflation. Without a clear break to the upside or downside, we may continue to see a gyrating Greenback throughout the recovery. 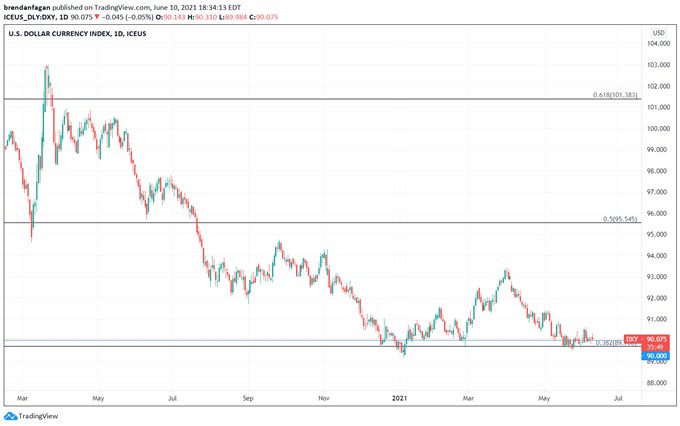 The US Dollar Index sits in a precarious position right now, just above the psychologically significant level of 90. The Greenback has held up well against this level, despite strong economic data, inflation concerns, and an unprecedented Quantitative Easing (QE) program. As the conversation begins to turn to tapering at the Federal Reserve, markets could begin to see a stronger US Dollar once the intention to slow asset purchases is communicated. Between the 90 handle and the 0.382 Fib level at 89.708, the US Dollar has found an extremely strong support zone, only trading below this level for a brief period in early January.

Taking into account a potential taper in the coming months along with continued strong economic data, the catalysts are present for the Dollar Index to push higher even in the face of unsustainable government spending. Continuing on the current trajectory toward “substantial further progress,” as the Federal Reserve puts it, may push the Dollar Index back towards the 0.5 Fib level at 95.545 or even toward pre-COVID levels near 100. The debate surrounding the recovery and this potential infrastructure bill revolves around one question – has American exceptionalism been priced in? Given the Greenback’s resilience in 2021, holding above 90.00, another potential $1.2 trillion in fiscal spending may not provide as large a shock to the system as some might think.