Unsurprising inflation data sets up speculative talks for next week

Inflation was the talk of the week with actual figures coming in above estimates (see economic calendar below). The recent hype about soaring inflation strangely had minimal impact on financial markets with volatility remaining fairly passive. Many analysts who agree with the “transitory” standpoint by the Fed can find solace in the fact that while inflation numbers are high, the major contributors are a handful of products such as lumber and automobiles.

Widespread inflation across many products would cause greater concern of an overheating economy and may lead to intervention from the Fed. For now, the central bank is likely to continue on it’s current path of average inflation targeting as well as refute any rumors of tapering just yet. Next weeks Fed interest rate decision (June 16th) will be more geared toward identifying any possible (but unlikely) suggestions of changes in forward guidance.

Following on from the aforementioned inflation data, U.S. treasury yields reacted in a less obvious manner. Generally when inflationary pressure rises, bond yields tend to rise with it in order to compensate for this inflation risk and depressed bond returns (see chart below). However, this week saw the opposite as reflected by the highlighted area on the chart. So why would bond market participants jump at the chance to buy U.S. treasuries at yields of roughly 1.5%?

There are a few possible reasons for this:

Does this mean the bond market is supportive of the Fed and it’s policy of a brief spout of high inflation? Next week’s meeting should give a clearer picture of the way forward.

The ECB was also in the spotlight this week with their interest rate announcement resulting in an unsurprising continuation of the 0% rate figure (see economic calendar below).

The announcement was met with emptiness as the chart below so aptly represents. EUR/USD hardly moved a muscle with the PEPP program to persist with its purchase pace targets – which are expected to increase relative to prior months. Next week the Eurozone will look forward to core inflation figures which have until now remained subdued - dissimilar to the US. 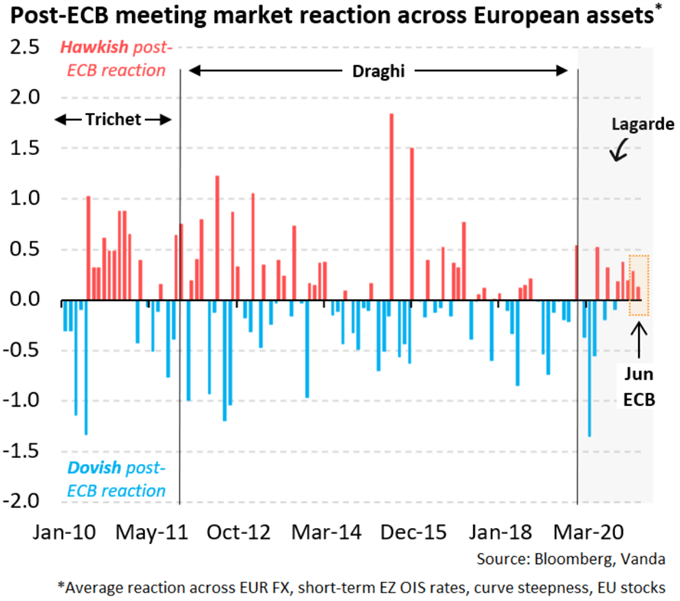