U.S. Inflation Accelerates in May at Fastest Pace since 2008, Treasury Yields Tick Higher

The Consumer Price Index jumped 0.6% in May and 5.0% on an annual basis, the fastest pace in more than a decade as the economic recovery kicked into high gear and energy costs remained skewed to the upside. Economists surveyed by Bloomberg News had been looking for an increase of 0.5% m/m and 4.7% y/y in the headline print. Meanwhile, core inflation, which excludes food and energy products, rose 0.7% with respect to April and 3.8% over the last 12 months, two tenth of a percent above consensus, driven primarily by a spike in used cars and truck prices.

The table below summarizes the main drivers of the CPI index according to the Bureau of Labor Statistics: 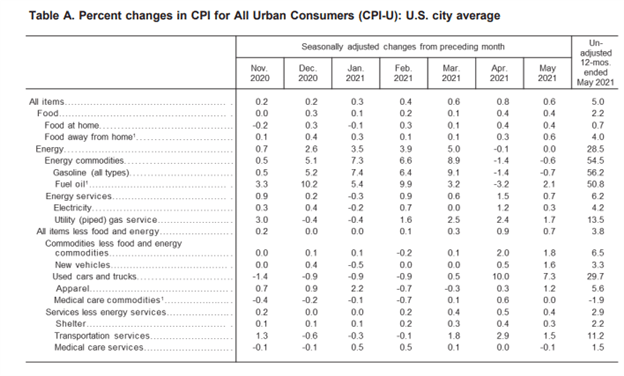 For a long time before the coronavirus crisis hit the world, the United States economy struggled with dormant and weak inflation, but in recent months the trend has reversed dramatically amid reopening pent-up demand, supply bottlenecks, higher commodity prices and base effects. Although policy makers characterize the surge in prices as transitory in nature, some markets participants are skeptical and believe the problem may morph into a long-term predicament and become entrenched if left unchecked by the central bank.

Immediately after the CPI report crossed the wires, US treasury yields began to climb, with the 10-year yield rising 3 bp 1.52%. Meanwhile, the dollar, measure by the DXY index, also ticked higher, although the moves were limited. Many investors are of the opinion that mounting and sticky inflationary pressures may prompt the Federal Reserve to start the bond tapering debate sooner rather than later to reduce the risk of economic overheating. Generally speaking, the withdrawal of monetary stimulus (QE) may push interest rates higher and boost the US dollar, ceteris paribus. 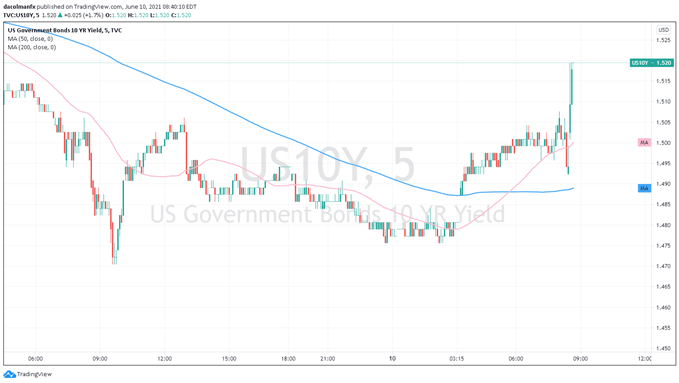 Despite the financial noise and speculation, it remains uncertain whether the latest inflation data will be enough to alter the Fed's normalization roadmap, especially since the labor market has not made substantial progress towards the employment mandate. To better understand the FOMC’s thinking, it is very important for all traders to closely follow the institution's monetary policy announcement scheduled for next week. At the June meeting, the central bank will present its updated summary of economic projections (Dot plot, etc.) and may offer new clues about its next steps. Needless to say, the forward guidance and new forecasts will be crucial for financial markets and may pave the way for the next major move in various asset classes such as the US dollar, EMFX, treasury yields, equities, etc.