Crude oil prices extended lower during Thursday’s APAC session after falling 0.4% a day ago. Sentiment soured after the Energy Information Administration (EIA) reported a 7-million-barrel build in motor gasoline stockpiles for the week ending June 4th – the highest seen since April 2020. This may signal swelling supply conditions as refiners ramped up production to meet demand for the summer driving season. A large build in gasoline and distillate fuel oil inventories undermined a larger-than-expected fall in crude stockpiles (chart below).

While crude inventories have fallen over 10 million barrels for the last two weeks, gasoline stocks have increased 8.5 million barrels. It suggests that demand is probably not as strong as previously anticipated, spurring profit-taking activity as prices hit a two-and-half year high. 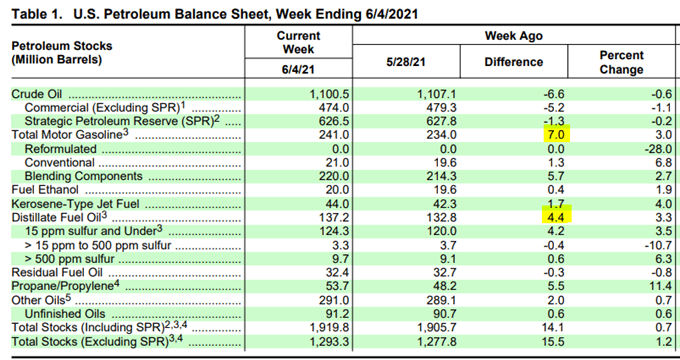 Oil prices have nearly doubled since November, propelled by the global economic recovery and vaccine rollouts. OPEC+ have upgraded the outlook for global energy demand for the second half of the year, preparing to gradually ease production curbs to meet rising fuel needs. The favourable macro background may pave the way for oil prices to extend higher despite near-term volatility.

Meanwhile, traders are eyeing the resumption of nuclear accord talks between Iran and the world powers today. While no major breakthroughs in the deal has been made so far, the anticipation of the return of Iranian oil supply in the future may still weigh on prices. In view of the Iran presidential election to be held on June 18th, the likelihood for a meaningful deal to be struck before that remains thin.

WTI vs. Crude and Gasoline Inventory Changes – Past 12 Months 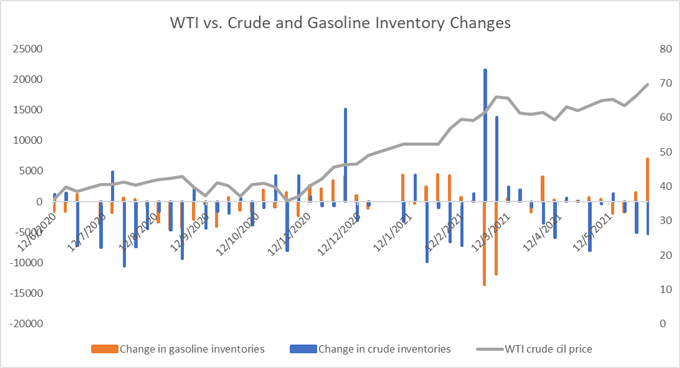 Technically, WTI hit an immediate chart resistance at $70.00 and has since entered a minor correction. The overall trend remains bullish-biased, as suggested by the upward-sloped SMA lines. The MACD indicator is flattening and may start to form a bearish crossover, pointing to weakening momentum. 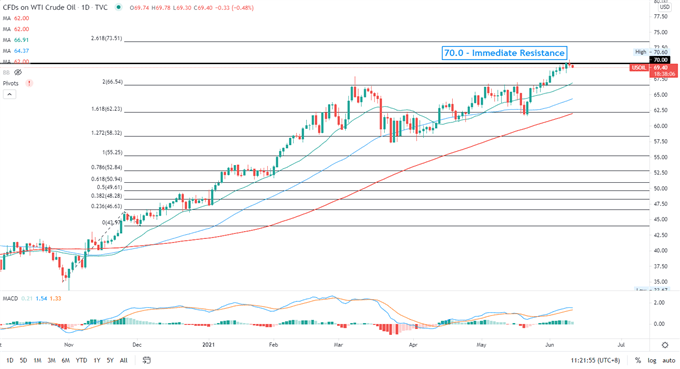