Central Bank Digital Currencies: If you can’t beat them, join them?

Central banks across the globe are rethinking their stance on digital currencies, also known as cryptocurrencies,especially as these new forms of payment provide a looming threat to traditional money. Central banks are scrambling to incorporate the new digital currency technology into their current systems to maintain control.

What is a Central Bank Digital Currency (CBDC)?

A Central Bank Digital Currency (CBDC) is a digital structure of a country’s fiat currency such as the U.S. Dollar. This form of currency is centralized and preserves the regulatory component and role of central banks. The technology proposes that CBDCs are essentially “electronic cash” that may be used to make payments etc.

Why are Central Banks considering CBDCs?

Central Banks are concerned about losing control of the financial system as popular cryptocurrencies such as Bitcoin (BTC) gain popularity. The loss of influence on the monetary system could lead to economic instability as cryptocurrencies do not contain any legal or regulatory defenses that traditional central bank money currently exercises.

CBDCs can be thought of as a replacement for bank notes as mentioned by the Bank for International Settlements (BIS) Head of Innovation Benoit Coeure. These bank notes conventionally flow from the central bank to commercial banks to retail consumers via ATM’s. What CBDCs will do is replace paper bills with a digital form of currency which will likely replicate the operational flow of money as to minimize disruption on the existing financial system.

This increases the central bank’s efficiency in terms of monetary policy, data analysis and the ease at which money can reach individuals – which can be extended to a specific subset of the population such as homeless populations.

China’s digital Yuan could be a game changer

China has been at the forefront of digital payments as private company systems like Alipay and WeChatPay have soared. More recently, the Chinese central bank has been experimenting with a digital Yuan in certain cities in China. There has already been an uptake in usage as there are zero transaction costs for merchants which may ultimately displace methods such as Alipay and WeChatPay. The first challenge for the Chinese central bank is to integrate the digital Yuan across the nation with the appropriate security and technological systems which is already under the scrutiny as privacy concerns intensify.

Perhaps the primary goal behind China’s push for CBDC dominance is to depose the U.S. Dollar which may be conceivable in digital form. Once the digital Yuan is cemented as the leading source of payment in China, foreign companies will need to adopt this form of transaction which could have a systemic effect on the global financial system and its reliance on the U.S. Dollar as the principal currency of choice.

While other economies are pouring vast amounts of resources into CBDCs, there is much to learn from the Chinese and their current rollout strategy. The world will be keeping a close eye on the digital Yuan to avoid similar mistakes and approach the future with caution. Currently, there is a trade-off between privacy and convenience which needs to be addressed before global adoption. 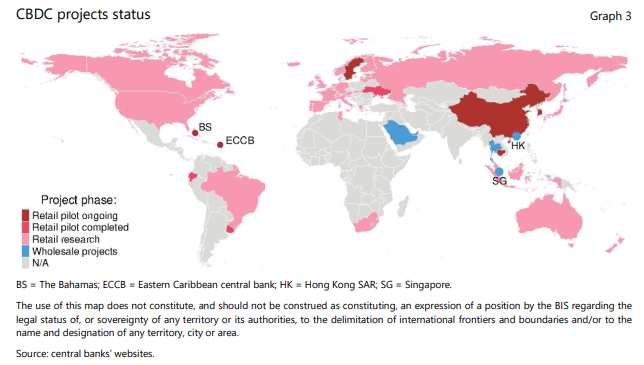 Other notable digital currency ventures include the Digital Dollar Project in the U.S. as well as the digital Euro via the ECB. Virtually all central banks are exploring CBDCs which almost confirms the implementation of the digital currency objective in years to come. As developments unfold, it will be interesting to witness the changing of the guard from traditional money to the new era of Central Bank Digital Currencies (CBDCs).