WTI Crude oil prices achieved an important milestone today, climbing over the psychologically imposing 70 level as energy traders bet on a bullish demand picture. One bolstered by increasing vaccination rates and positive momentum in global travel measures. Much uncertainty remains, however. Higher highs are all but guaranteed given the fragile conditions amid the ongoing Covid pandemic.

Rising oil prices have helped spur inflationary fears in markets given the commodity is typically viewed as a key gauge to measure demand pressures in the global economy. While on the subject, traders will have a close eye on US inflation figures, due out later this week. The consumer price index (CPI) is expected to cross the wires at 4.7% on a year-over-year (YoY) basis. When stripping out food and energy prices, which include oil, the figure drops to 3.5% YoY, still well above the Fed’s 2% average target over time.

One potential headwind to rising oil prices as of late has centered around the return of Iranian oil to markets. Traders have been watching talks between the United States and Iran closely in recent weeks. The aim between the US and the major oil-producing country is to return to compliance with the Joint Comprehensive Plan of Action (JCPOA), which had many believing an agreement would see millions of barrels of Iranian oil return to the market.

However, oil prices paced higher after US Secretary of State Anthony Blinken cast doubt on that scenario, even if Iran and the US do return to compliance with the JCPOA terms. Iran has been accused of only accelerating its efforts toward producing nuclear weapons since the Trump administration removed the US from the deal in 2015. According to Reuters, The Secretary of State on Tuesday told the Senate Foreign Relations Committee:

“I would anticipate that even in the event of a return to compliance with the JCPOA, hundreds of sanctions will remain in place, including sanctions imposed by the Trump administration. If they are not inconsistent with the JCPOA, they will remain unless and until Iran's behavior changes.”

The immediate focus for oil comes in the form of inventory numbers due Wednesday from the US Energy Information Administration (EIA). Per the DailyFX Economic Calendar, a 2.036 million barrel reduction is expected to cross the wires for the week ending June 4, which would be the third consecutive inventory draw. The American Petroleum Institute (API) report showed a 2.108 million barrel draw today, although the private entity report usually takes a backseat in terms of relevance to the EIA report. Check out the video above for further analysis.

While prices are slightly above the psychologically imposing 70 handle, a decisive break higher is likely needed to cement the victory and place the level as a possible area of support on the next turn lower. That said, the technical outlook favors more upside after breaking higher from an Ascending Triangle pattern last week.

That said, the Relative Strength Index (RSI) and MACD oscillators are flashing a degree of negative divergence between the March swing high and current prices, although the latter is trending bullishly higher above its signal line. Moreover, the rising 20-day and 50-day Simple Moving Averages (SMA) are also showing bullish upside energy. Watch for the 70 handle to hold to confirm bullish momentum in the near term. 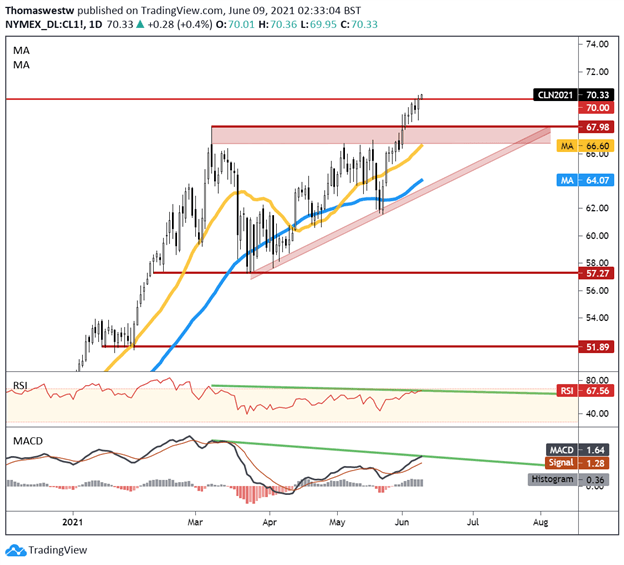