Wall Street stocks were mixed on Monday as a global minimum corporate taxconsensus at the G-7 summit weighed on sentiment. Multinational corporations, such as Amazon and PayPal, are more vulnerable to the potential changes. Only 32.9% of the S&P 500 companies finished higher, even though the index barely dropped at close.

The technology sector outperformed as a FDA approval of Biogen’s aducanumab – the world’s first drug to target an underlying cause of Alzheimer’s disease – boosted the biotechnology sector. Biogen’s share price surged 38% and extended higher during after-market hours.

Prices of Bitcoin – the most widely traded cryptocurrency – plunged over 5% to $33,700 amid a renewed wave of headwinds. Prices started to fall on Friday after Elon Musk posted a tweet hinting that he has “broken up” with the digital token. News that US Justice Department (DOJ) seized 63.7 Bitcoins from the DarkSide hacking group responsible for the Colonial Pipeline attack further weighed on the crypto sentiment. $33,700 seems to be an immediate support level, breaking which may lead to further losses towards the $33,000 mark.

Investors are waiting for Thursday’s US inflation figures for clues about rising price levels and their ramifications for the Fed monetary policy. The recent surge in the core PCE reading and a robust recovery in the labor market are paving the way for Fed officials to start a debate about tapering. The critical part is at what pace will the central bank scale back its $ 120 billion per month bond purchases and when will it could start. Before a clearer picture is drawn on that prospect, markets may be reluctant to move significantly higher.

Asia-Pacific markets look set to open mixed on Tuesday. Futures in Japan, Australia, Hong Kong, South Korea and Thailand are trading mildly higher, whereas those in mainland China, Taiwan Malaysia and India are in the red.

The Nikkei 225 index struggled with the 29,000 level on Monday as disappointing Chinese exports data suggested that growth momentum of the world’s second largest economy may be slowing. The Japanese economy contracted by -3.9% in the first quarter, compared to a -4.8% forecast, according to data released this morning. A better-than-expected GDP data may provide some support for trading today.

Looking ahead, Eurozone GDP data dominates the economic docket alongside Canadian and US balance of trade. Find out more from DailyFX economic calendar.

The Nasdaq 100 index has likely formed a “Double Bottom” pattern that is inherently bullish in nature. The pattern suggests that the index has found a near-term support at around 13,000 and may be positioned for further gains. An immediate support level can be found at 13,430 (the 161.8% extension), while a key resistance can be seen at 14,000 (200% Fibonacci extension). The MACD indicator is trending higher, suggesting that upward momentum may be building. 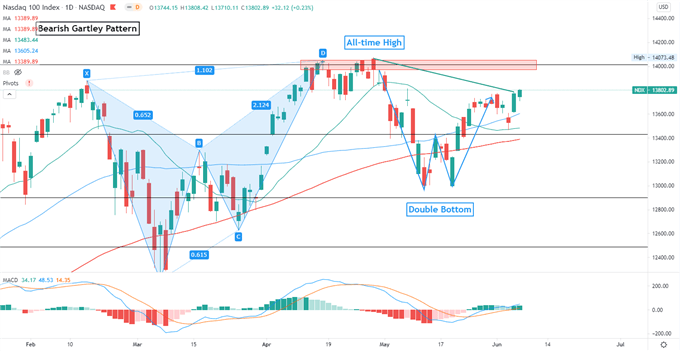 The Nikkei 225 index is attempting to breach the ceiling of the “Descending Channel” formed since early March. A successful attempt may open the door for further gains with an eye on 31,200 – a major resistance. The MACD indicator formed a bullish crossover and trended higher, suggesting that downward momentum may be fading. 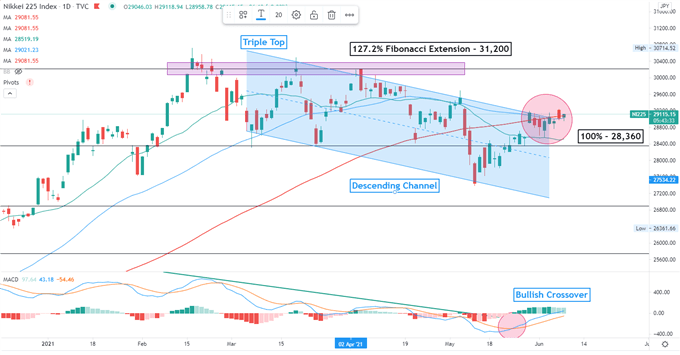 The ASX 200 index reached an all-time high on Friday after breaching above a key resistance level of 7,194 – the 127.2% Fibonacci extension. an immediate resistance level can be found at 7,340 – the 161.8% Fibonacci extension. Prices have since pulled back slightly, but the overall trend remains bullish-biased. The MACD indicator formed a bullish crossover and trended higher, suggesting that upward momentum is dominating. 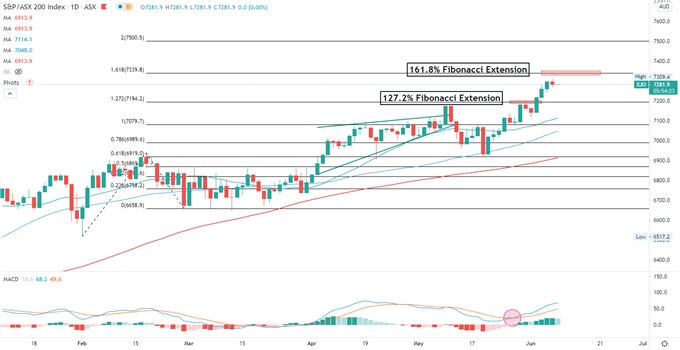