Gold prices pulled back slightly during Monday’s Asia-Pacific trade after rising over 1% on Friday. Market participants are assessing comments by Treasury Secretary Janet Yellen, who showed her support for President Joe Biden’s $4 trillion spending plans even if inflation persists into next year. She also added that a “slightly higher” interest rate environment would be a “plus” for the US, reigniting fears about tapering Fed stimulus. As a result, the 10-year Treasury yield rebounded nearly 1% to 1.569%, reflecting reflation hopes.

Real yield, as represented by the 10-year inflation-indexed security- edged 2bps higher to -0.86%. This dented the appeal of gold as the opportunity cost of holding it increased. The DXY US Dollar index also climbed modestly to 90.17, exerting downward pressure on gold. Both real yield and the DXY US Dollar index historically exhibit a negative correlation with gold, and their past 12-month performance can be viewed on the charts below.

Looking back at Friday’s close, a slight miss on May’s nonfarm payrolls data cooled fears about the Fed tapering stimulus and sent bullion prices 1% higher. Some 599k jobs were added last month, compared to a 650k baseline forecast. While the labor market participation rate remained largely unchanged, the unemployment rate fell to 5.8% from 6.1% in the prior month, hitting a pandemic-era low.

It is worth noting that wage growth climbed 2% YoY versus a 1.6% forecast, pointing to rising inflationary pressures that may lead to a debate among Fed officials about when to start scaling back the central bank’s bond purchasing program.

Looking ahead, Euro area GDP data and the ECB interest rate decision dominate the economic docket this week. Meanwhile, US inflation readings will also be closely monitored by traders for clues about rising price levels and their ramifications for Fed monetary policy. US headline inflation is expected at 4.7% YoY in May, hitting the highest level since 2008. A large deviation from this expectation may lead to heightened market volatility, especially for stocks, forex and precious metals.

Technically, gold prices extended higher within an “Ascending Channel” after completing a “Double Bottom” chart pattern. Prices breached above a key resistance level at $ 1,875 (the 50% Fibonacci retracement) and have likely opened the door for further upside potential with an eye on $ 1,922 (the 61.8% Fibonacci retracement). Selling pressure seems to be building above a psychological level of $ 1,900, which may be viewed as an immediate resistance. The MACD indicator formed a bearish crossover, signaling that a deeper pullback is possible. 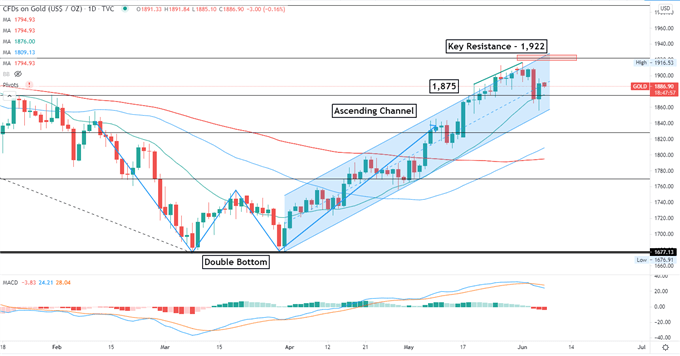