Crude oil prices extended higher during Wednesday morning APAC trade before pulling back slightly mid-day. Prices surged 1.46% a day ago and closed a hair beneath the $ 68.00 figure. Yet this still marked the highest level seensince October 2018. WTI prices have more than doubled from November of last year, boosted by revitalized demand as the global economy recovers from the pandemic. US crude inventories have been falling in the past few months, underscoring strong underlying demand.

OPEC+ gave a green light to a further increase production by 850k bpd in July, as agreed at a meeting in early April. The oil cartel painted a rosy demand outlook for the second half of this year, forecasting that global inventories could fall by 2 million bpd during the September to November period. Saudi Arabia’s energy minister Prince Abdulaziz bin Salman said demand “has shown clearsigns of improvement”, boosting investor confidence.

Meanwhile, nuclear talks between Iran and the US have paused for now and an Iranian official said a deal is expected to be finalized in August. This alleviated concerns surrounding a potential near-term rise in output from the Middle Eastern country if a nuclear accord is revived.

More encouragingly, the ISM US Manufacturing PMI reading smashed market forecasts, underscoring economic strength. The reading came in at 61.2, exceeding a baseline forecast of 60.9 and marking the 12thconsecutive month of expansion. Demand, consumption and inputs registered strong growth compared to April, with supply shortages and labor constrains pointing to a strengthening price outlook. 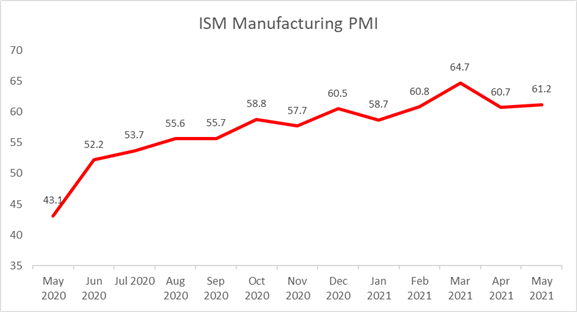 The Energy Information Administration (EIA) will report weekly inventories data later today. Markets anticipate a 2.27-million-barrel draw in stockpiles. A larger-than-expected decline may serve to underpin crude oil prices, whereas a smaller one or an increase would likely do the reverse (chart below). Total inventories have fallen to a three-month low of 484.35 million barrels, and this trend looks set to continue with the arrival of the summer driving season. 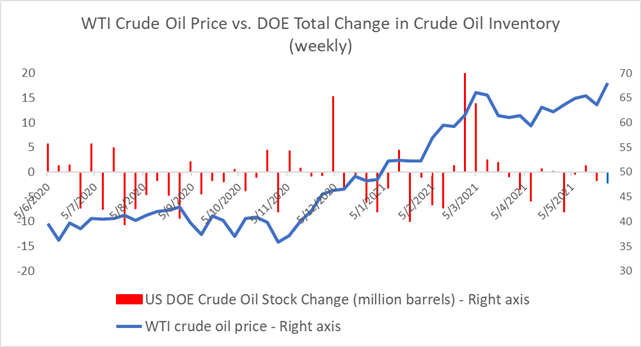 Technically, WTI decisively breached above a key resistance level at 66.50 (the 200% Fibonacci extension) this week, and thus opened the door for further upside potential. The overall trend remains bullish-biased, as suggested by the upward-sloped SMA lines. The MACD indicator is attempting to breach a downward trendline as well, showing that bullish momentum may be building. 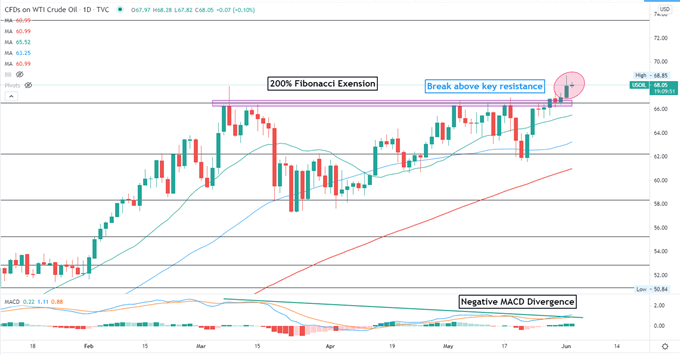