Futures on the Dow Jones, the S&P 500 and Nasdaq 100 stock indexes traded slightly lower during Tuesday’s early APAC hours after the Memorial Day holiday. The US and UK markets are resuming trading on Tuesday. Investors are facing a slew of key market events down the road, including the RBA interest rate decision and an OPEC+ meeting. German unemployment, Eurozone core inflation as well as US ISM manufacturing PMI data are also on tap. Later this week, the US nonfarm payrolls report headlines the economic docket. Find out more from DailyFX economic calendar.

The RBA is widely expected to keep its policy rate unchanged and maintain both benchmark lending rates and the 3-year bond yield target at 0.1% in a meeting today. The central bank’s policy stance may be tilted to the dovish side given a dismal April jobs report and viral resurgence in Victoria State. This may exert downward pressure on the Australian Dollar alongside falling iron ore prices.

WTI crude oil prices are hovering near a key resistance level at $ 66.50 as traders awaits output guidance from the OPEC+ in a meeting scheduled today. The oil cartel and its allies are widely expected to stick with a decision to gradually boost output during May to July. Now they might need to take a potential rise in Iranian production into consideration as Washington and Tehran are reported to be moving closer to reviving the nuclear disarmament deal jettisoned by the Trump administration. 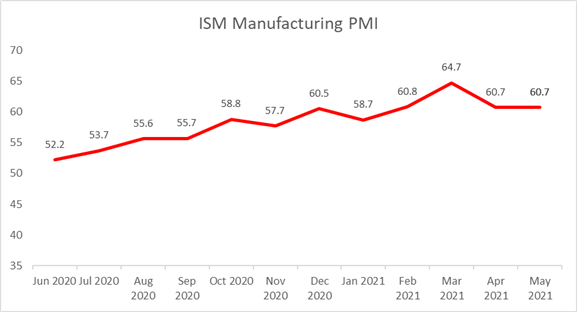 Asia-Pacific markets look set to open mixed after a quiet Monday. Futures in Japan, Australia, Hong Kong, Singapore are in the red, whereas those in mainland China, South Korea, Taiwan, India and Thailand are in the green. China announced a major shift in child policy on Monday by encouraging married couples to have up to three children, from the existing limit of two. This came against the backdrop of a rapidly aging population and a dramatic decline in births as the cost of living soared. Both the Shanghai Composite and Hang Seng Index (HSI) ended mildly higher.

The Nikkei 225 index fell almost 1% on Monday as a disappointing Chinese NBS manufacturing PMI data suggested that growth momentum of the world’s second largest economy may be slowing. Meanwhile, Japan’s retail sales rose 12% YoY in April, compared to a baseline forecast of a 15.3% rise. Poorer economic readings and viral concerns may continue to weigh on the index.

Australia’s ASX 200 index slipped 0.3% on Monday after hitting an all-time high of 7,203.3 during the session. The recent pullback in iron ore and copper prices led to a retracement in major mining companies such as Rio Tinto, BHP and FMG, whereas surging bullion prices lifted gold miners.

The Nasdaq 100 index has likely formed a “Double Bottom” pattern that is inherently bullish in nature. The pattern suggests that the index has found a near-term support at around 13,000 and may be positioned for further gains. An immediate support level can be found at 13,430 (the 161.8% extension), while a key resistance can be seen at 14,000 (200% Fibonacci extension). The MACD indicator formed a bullish crossover, suggesting that upward momentum is prevailing. 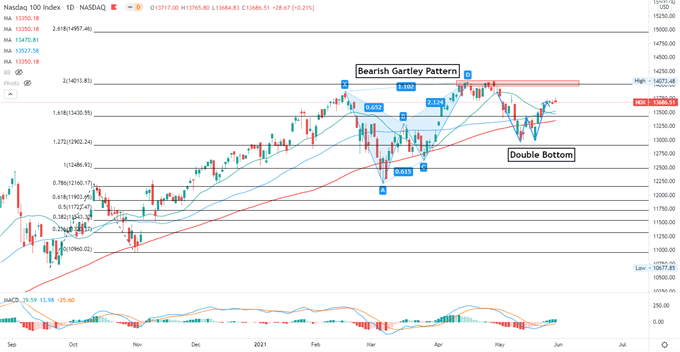 The Nikkei 225 index entered a consolidative phase after it failed to breach the 30,214 resistance (the 127.2% Fibonacci extension). Prices have likely formed a “Descending Channel”, the ceiling and floor of which may be viewed as immediate resistance and support levels. The MACD indicator formed a bullish crossover, suggesting that downward momentum may be fading. 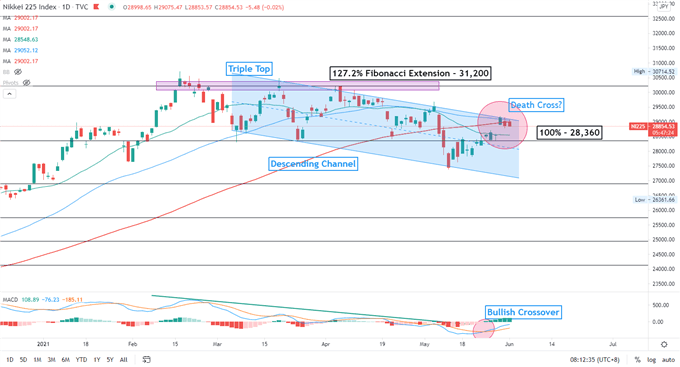 The ASX 200 index reached an all-time high on Friday after breaching above a key resistance level of 7,126 – the 261.8% Fibonacci extension. Prices have since pulled back slightly, but the overall trend remains bullish-biased. The MACD indicator formed a bullish crossover and trended higher, suggesting that upward momentum is building. 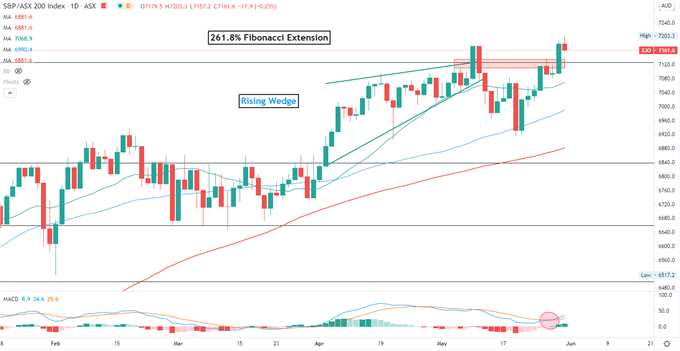