U.S. crude has reached multi-year highs this morning after expectant favorable economic conditions. Key economic data scheduled this week (see calendar below) from both the European Union as well as the United States, should give market participants a good gauge of the state of the two major economic regions and therefore guidance on oil prices – better than expected data could lead to further support for oil prices. Focus will be on Non-Farm Payroll (NFP) data as well as U.S. PMI’s. Expect some dollar volatility pre and post-announcements which could have a knock-on effect on dollar based commodities should actual data deviate significantly from forecasts. 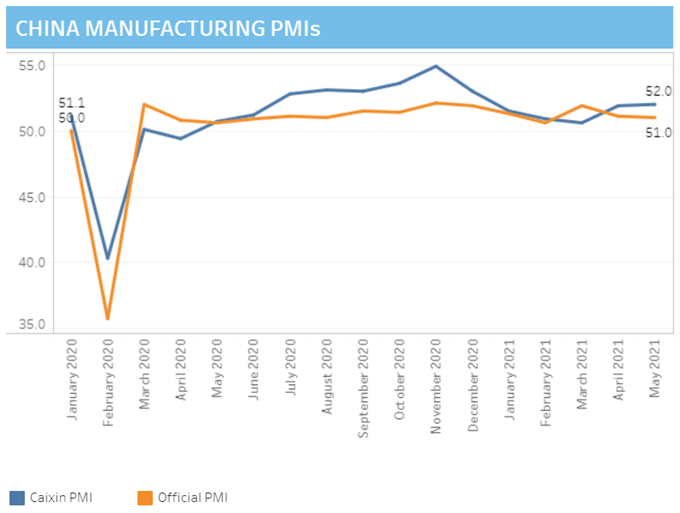 The Organization of the Petroleum Exporting Countries (OPEC) as well as their associated producers known as OPEC+ confirmed that the return of Iran to the global oil landscape will be handled in an “orderly and transparent fashion”. Concerns surrounding excessive supply flooding the market has somewhat eased after this announcement but time will tell as to the accuracy of the statement released by OPEC. This comes at perhaps an inopportune time as world oil inventories have recently recovered from a sever supply glut due to the COVID-19 pandemic.

OPEC+ are scheduled to meet later today to discuss previous production cuts which will likely be eased as well as further discourse around Iran. This is an important meeting which should give some clarity on crude oil prices moving forward.

COVID-19 continues to plague financial markets with the disjointed recovery present throughout the globe. Recoveries and re-openings tend to chop and change almost daily which can sway oil prices with major oil consumers such as India contributing to lesser demand. 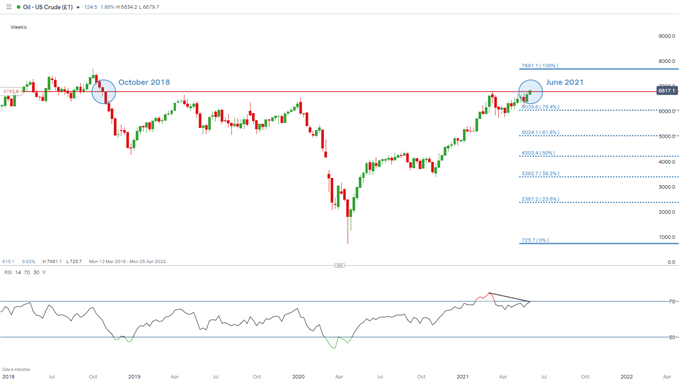 This being said, the Relative Strength Index (RSI) suggests decelerating upside momentum and is in overbought territory. Price action on the weekly chart also opposes the RSI resulting in bearish divergence which could see prices fall to prior support levels. Divergence can take time to reveal itself so the signal should be approached with caution. 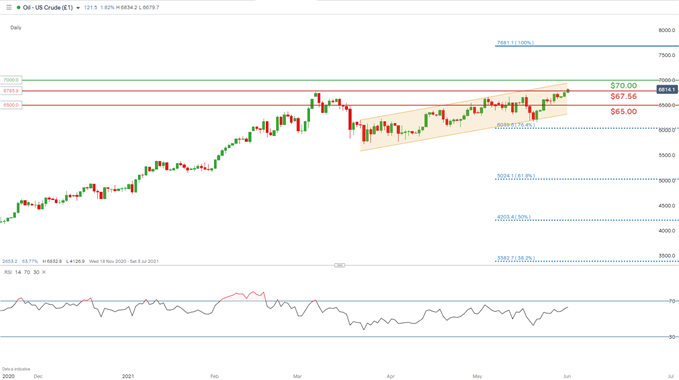 U.S. crude continues to trade within the ascending channel (yellow) which has recently seen price action pierce the 2021 high at $67.86 per barrel. This could open up the next resistance target zone at the key psychological $70 per barrel level. From the bearish perspective, a pullback toward the $65 per barrel may be favored as bullish momentum could be slowing according to the RSI mentioned on the weekly chart above.

IGCS shows retail traders are marginally net short onCrude Oil, with 54% of traders currently holding short positions (as of this writing). At DailyFX we typically take a contrarian view to crowd sentiment however, because the daily change shows an increase in long positions relative to shorts we settle on a mixed bias.