The Biden Administration revealed its proposed budget for fiscal year 2022, headlined by a top line request of $6 trillion. Incorporated in President Biden’s proposal is funding for two major initiatives, the American Families Plan and the American Jobs Plan, neither of which has been seriously debated by Congress. The plan also takes into account an increase in the corporate tax rate from 21% to 28%.

The proposed budge also highlights a shift in tone in Washington, as the new administration looks to stamp its mark on domestic affairs. The new budget sees a 41% increase in funding for the Department of Education coupled with a 22% increase for the Environmental Protection Agency. President Biden has previously spoken that the budget is a reflection of values, hence the focus on social and environmental causes. 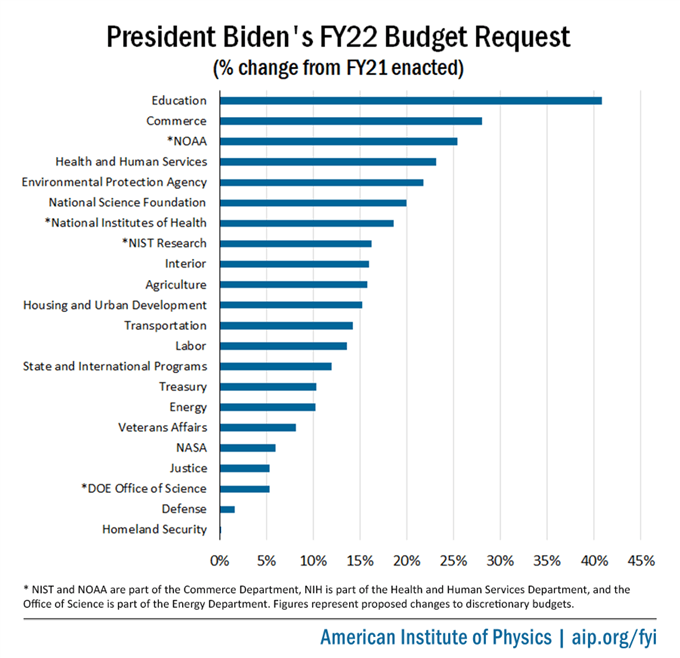 Chart courtesy of the American Institute for Physics

While the top-line request made by the Biden Administration totals $6 trillion, only about $300 billion in new spending is projected to be set aside for FY 2022. The budget takes into account various changes to the domestic tax code that have yet to be ratified, with these changes helping fund the multitrillion-dollar domestic spending spree. On top of the proposed increase in the corporate tax rate, President Biden will look to enforce penalties on American companies that offshore jobs and park funds abroad.

Lastly, the budget sees unemployment falling to 4.7% by year’s end, still well off the pre-pandemic print of 3.5% in February of 2020. In the longer-term unemployment is expected to fall to 3.8%. Also of note, the Administration also projected that inflation will be no higher than 2.3% over the next decade, potentially easing some fears that caused markets to become “jittery” in recent weeks.

Following the reveal of the budget proposal, USD strength dissipated as the US Dollar Index (DXY) fell to session lows following the opening bell in New York. Trading as high as 90.44, DXY subsequently fell back below 90 in a swift move to the downside. The month of May has seen the theme of a weaker Greenback prevail as yields remain suppressed and risk assets continue to catch a bid. Throughout 2021, the 90 handle for DXY has proven to be a significant pivot point. For much of January and February, the Index failed to materially break below. In recent sessions following significant weakness throughout the month of April, DXY bottomed and bounced at/around the 90 support level. 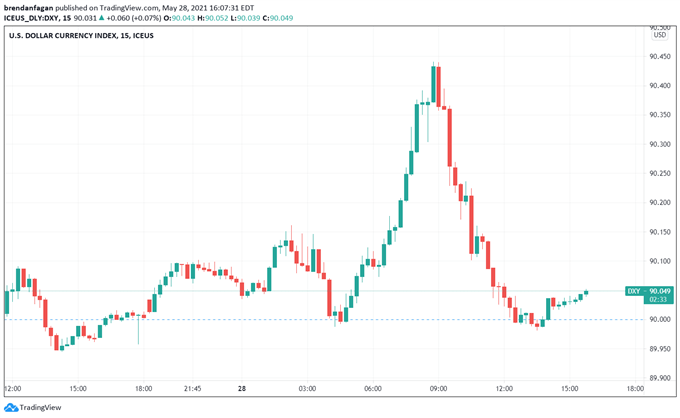 Investors can look to a plethora of upcoming catalysts for potential direction in the US Dollar. Month end flows for May, manufacturing and services PMIs on June 1, and nonfarm payrolls on June 4 will help paint a picture for the strength of the American economy, and in turn the US Dollar. Just beyond those dates, rests the June FOMC policy meeting on the 15th and 16th. For more on potential market moving dates and events, please click here to view the economic calendar.