Bitcoin (BTC/USD) on the slow path to recovery

After Bitcoin’s crash last week, the dominant cryptocurrency has somewhat recovered, moving back up towards the $40000 mark. Unease still surrounds the digital currency market as environmental concerns remain at the forefront for influential figures such as Tesla’s Elon Musk. After a few tweets relating to Bitcoin miners’ impact as well as the development of Dogecoin, Mr Musk has yet again prompted significant price action on the crypto market. 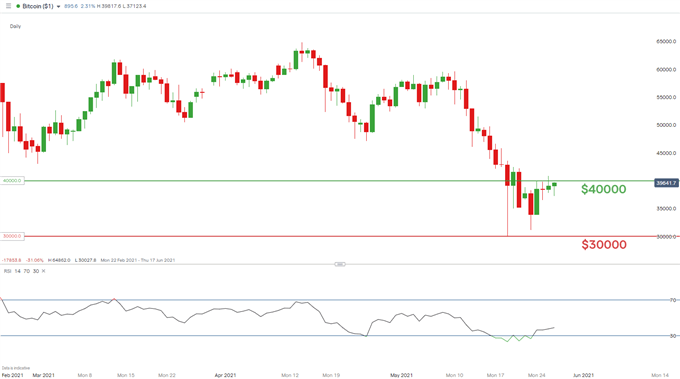 The Bitcoin (BTC/USD) daily chart above gives a clear reflection over the past week with the $30000 key psychological support level holding firm. Bitcoin bulls are now eyeing the $40000 resistance zone which has proved tough to pierce this week. This push higher is seeing increased fundamental opposition as Iran temporarily banned crypto mining up until September 22, 2021.

The Relative Strength Index (RSI) is slowly edging out of oversold territory as mentioned in last week’s report after a strong downward move. It may be too early to call a reversal just yet however, additional external factors may provide the catalyst needed for confirmation of a directional bias.

While Bitcoin’s (BTC/USD) facility to provide a store of value is being questioned, its often overlooked predecessor gold has been flying under the radar to new four month highs.

This weak dollar is relentless as a result of Fed support of the current stimulatory policy; with no signs of tapering anytime soon. In conjunction with the weak dollar, U.S. 10-year benchmark government bond yields have declined which has supported the non-interest bearing aspect of gold and helped in the recent tailwind behind gold prices.

That being said, tomorrow’s PCE data may re-write the recent trend of inflationary fears depending on the actual figure and how it may differ from the forecast.

The inverse relationship between spot gold and Bitcoin has been quite apparent of recent as the two could not have acted any differently throughout 2020/2021 (see chart below). This phenomena may be to the detriment of cryptocurrencies as investors are flocking to the traditional safe-haven metal; notably when uncertainty presents itself in the digital currency space.

The main difference could be the historical sustenance in terms of value that gold comes with, while Bitcoin is still relatively new and has yet to prove itself when faced with certain headwinds. However, many attributes are shared between the two such as scarcity which can gather collective appeal.

Meme stocks are back at it!

With all that’s going on in the markets this week, meme stocks have made a comeback with notable price appreciation throughout including the notorious GameStop (GME). Other Reddit favorites (see chart below) also joined the rally as the S&P 500 (SPX) equity index gains over reopening optimism.

Get your weekly stock market update here!
What Do Other Traders' Buy/Sell Bets Say About Price Trends?
Register for webinar
Join now
Webinar has ended

The cryptocurrency dip last week may have given rise to profit taking in the market which may have been redirected into equities. With broad-based gains across the U.S. stock market, investors could be risk seeking hence the move into the riskier meme stocks. On the technical side, many of these stocks reached support or oversold levels on their Relative Strength Index (RSI) oscillator which may have prompted buying or buy orders around these levels.