Today’s RBNZ monetary policy statement will be the main focus for NZD traders. Given that the central bank is unanimously expected to maintain the cash rate at 0.25%, the primary focus will be on the accompanying statement and economic projections, in which the latter is likely to be upgraded. What’s more, with option implied vols over the 90th percentile in NZD/USD and AUD/NZD, we could be in for a decent sized reaction.

NZ Economy: Since the last MPS (Feb), the NZ economy has been much more resilient than the RBNZ had expected.

With that in mind, economic forecasts are likely to be upgraded, which could see the timing of a rate hike brought forward (keep an eye on the OCR forecast). Should this take place, the NZD would likely see an initial lift, however, the RBNZ will remain cautious in their rhetoric, emphasising that policy needs to remain very accommodative.

NZD Positioning: Heading into the meeting, markets appear to be leaning for a more hawkish outcome. This would have been boosted by the RBNZ’s shadow board who sees a strong case for tightening over the coming year. Alongside this, with both fast money (leveraged funds) and real money (asset managers) long NZD, the asymmetric trade would be for a hawkish disappointment relative to expectations. In this scenario, NZD/USD would be vulnerable to a drop below 0.7150. However, should the RBNZ provide an upbeat assessment, expect 0.7250 to be the target for bulls. That said, I remain optimistic on the NZD vs AUD and would look to fade any AUD/NZD rallies. 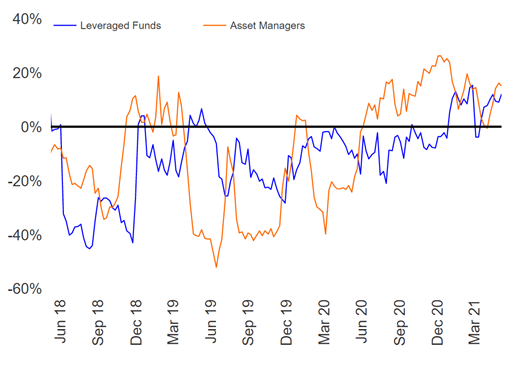 Looking at the prior meetings, the NZD has typically seen a larger reaction to meetings where there is a monetary policy statement. While the largest FX reaction had been seen in May 2020, we have to acknowledge that this was during a very uncertain time for markets. The November 2020 meeting had resulted in NZD strength following a hawkish reaction relative to expectations, where rates rallied having priced out the risk of negative rates. In light of the strong economic data, my view is that risks are tilted for a hawkish RBNZ, which will be enough to underpin the currency, despite markets already leaning on the hawkish side. However, as I mentioned previously, should the RBNZ disappoint relative to expectations, I continue to favour fading initial dips in the NZD, particularly against AUD. 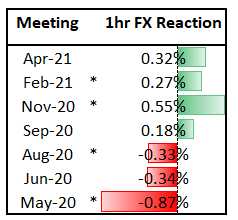