US stocks pulled back broadly on Tuesday amid inflationary concerns and falling crude oil prices. Investors are awaiting the minutes from the FOMC meeting for clues on the Fed’s take on inflation and conditions to warrant a debate on tapering. Demand for safety and inflation-hedge assets sent gold prices to a 14-week high of $ 1,870, whereas crude oil prices were lower amid a report that significant progress has been made for the US-Iran Nuclear Deal. Energy was the worst-performing sector overnight.

The DXY US Dollar index fell to a 4-month low of 89.78, suggesting that market participants are not worried about the Fed tapering stimulus any time soon. Fed Vice Chair Richard Clarida said that the weak jobs report showed the economy was not strong enough for the Fed to start considering withdrawing its stimulus efforts. Most economist also agreed that there will be little changes to the Fed’s policy anytime soon, although there are concerns that ultra-lose monetary policy is pushing inflation too high.

Sentiment is likely to remain cautious as a viral resurgence in parts of Asia remains on top of traders’ mind. Taiwan reported a record daily Covid-19 infections of 335 on May 17th and the government said on Tuesday that all schools will be shut until the end of this month. 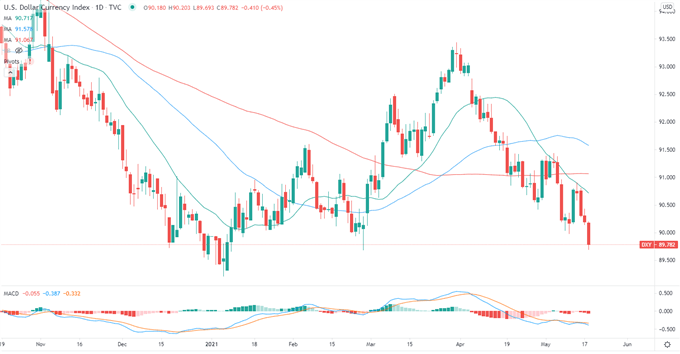 Asia-Pacific markets are positioned to open lower following a sour lead from Wall Street. Futures in Japan, Australia, Taiwan, Singapore and India are in the red, whereas those in South Korea, and Malaysia are in the green. The Hong Kong stock market is closed for Buddha’s Birthday holiday.

Japan’s Nikkei 225 index faces a pullback after rising over 2% on Tuesday. The Japanese economy shrank more than expected in the first quarter, with its GDP falling at an annualized rate of 5.1%. This might be attributed to state of emergency in several prefectures as well as a scale back in government and consumer spending due to the pandemic. The index reached a multi-decade high earlier this year but has since entered a consolidative period amid inflation concerns and a new wave of Covid-19 outbreaks.

Australia’s ASX 200 index is hovering beneath its all-time high as a pullback in commodity prices cooled its red-hot mining stocks such as BHP and Rio Tinto. A stronger Australian Dollar may also weigh the index as it makes the country’s exports more expensive to overseas buyers.

Looking ahead, core inflation rates from the UK, Europe and Canada dominate the economic docket alongside the FOMC minutes. Find out more from theDailyFX calendar. 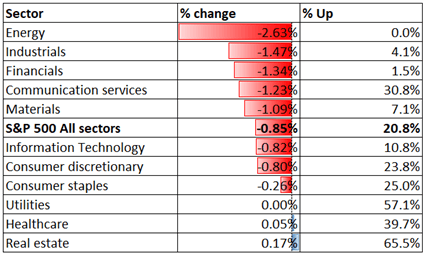 The S&P 500 index trended higher within an “Ascending Channel” formed since November. This suggests that the overall trend remains bullish-biased, although a technical correction appears to be underway. An immediate support level can be found at 4,076 - the 50-day SMA line, whereas an immediate resistance level can be seen at 4,169- the 20-day SMA. The MACD indicator formed a bearish crossover and trended lower, suggesting that downward momentum is prevailing. 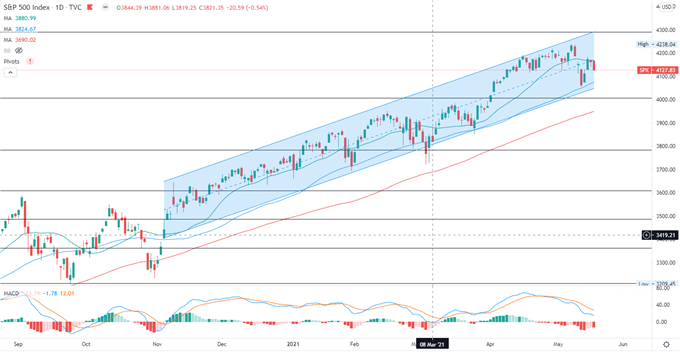 The Nikkei 225 index broke below a key support level at 28,357 – the 100% Fibonacci extension – and thus opened the door for further losses with an eye on 26,896 – the 78.6% Fibonacci extension. the 20- and 50-day SMA lines are about to cross below the 100-day line, potentially forming a “Death Cross”. The MACD indicator is trending lower beneath the neutral midpoint, suggesting that further consolidation is likely. 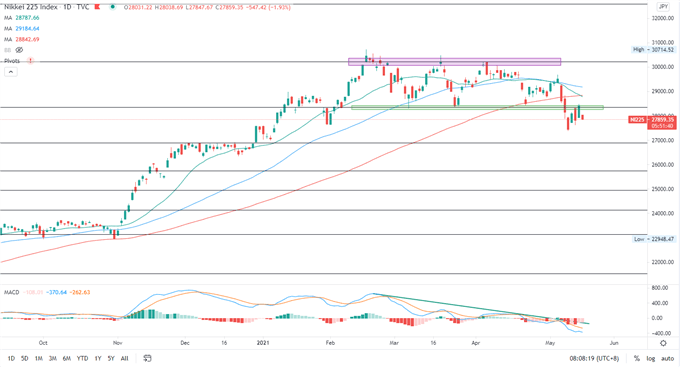 The ASX 200 index breached below a “Rising Wedge” chart pattern, which is inherently bearish in nature. This may point to further downside potential with an eye on 6,900 and 6,837 for support. 7,126 (261.8% Fibonacci extension) remains a key resistance. The MACD indicator formed a bearish crossover and trended lower, suggesting that selling pressure is prevailing. 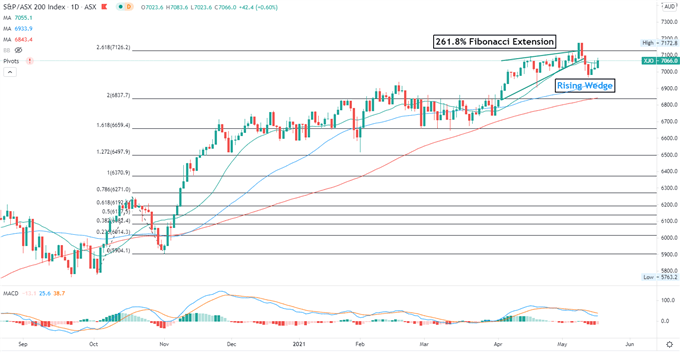