Bitcoin, Litecoin Aim Higher After Cryptos Get Musked Over Weekend

Bitcoin is up against the ropes, now down more than 30% from its all-time high back in April when the cryptocurrency hit 64,895.22 before breaking below a key trendline. The asset has been no stranger to volatility, but at its lower mark since late February, some signs of panic have appeared given the size of its selloff.

The volatility in Bitcoin, which has cascaded to the broader crypto market, comes amid confusion surrounding tweets from Elon Musk. The Tesla CEO’s tweets have shown to have the remarkable ability to cause a big price swing in not only Bitcoin, but also the entire digital currency space. Mr. Musk stated Monday that Tesla has sold no Bitcoin, following up a weekend tweet that eluded his electric vehicle company sold its Bitcoin portfolio.

The question poised now, given the current fundamental backdrop – which seems to compose mainly Elon Musk’s tweets – is will dip buyers step in with force? Or, will we see a further extension lower? It's important to remember that Bitcoin has made spectacular recoveries in the past, and a major recovery would likely be of little surprise.

The weekend selloff appears to have eased at a level of former resistance turned support. The volatile action since the April swing high also appears to have developed a downward channel after this week’s pivot higher confirmed the lower bound as support.

A break below the near-term support would likely see an extension lower, but the 200-day Simple Moving Average (SMA) along with the 161.8% Fib extension from the April low to May high may underpin prices. Alternatively, a move higher would aim for channel resistance, with levels of possible resistance from the intermediate Fib levels. 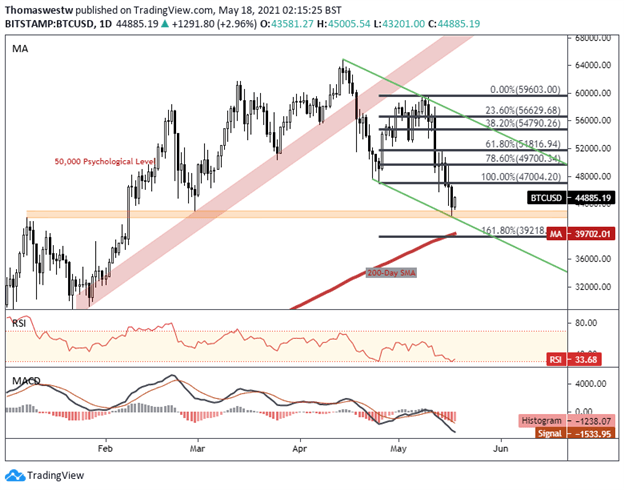 Litecoin has seen a comparatively strong bounce today versus Bitcoin, with the crypto coin near 6% off its May low. The 50-day SMA (blue line) has stepped back in to provide technical support, as seen late last month.

While LTC/USD still has a considerable gap to close to its recent swing high, a series of higher highs and lower lows from March remains in place, highlighting an overall bullish trend. That said, a move higher may see some gyration around its Fib levels. 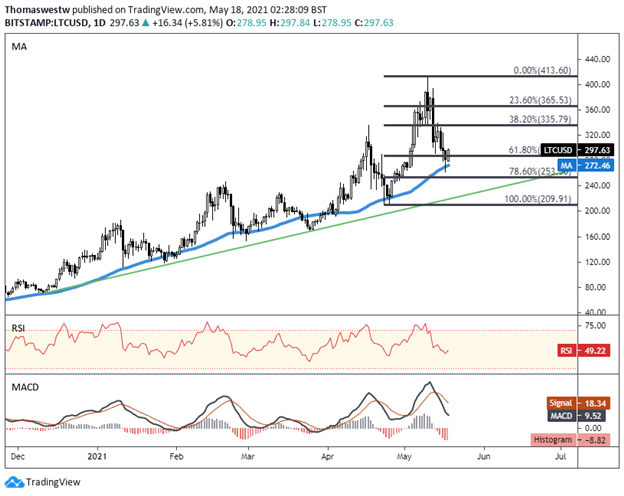