It’s been a brutal day for Bitcoin and its disciples after a sell-off in digital currencies wiped out almost $1 Trillion from the total crypto market cap, confirming the speculative rhetoric of the cryptocurrency realm.

Since February 2021, Tesla CEO Elon Musk has remained a fundamental driver of price action amongst the cryptocurrency landscape, supported by risk-on sentiment and an increase in institution interest for digital assets.

With speculation and crowd psychology driving the systemic pertinent trend, Elon Musk’s announcement to adopt Bitcoin as an alternative payment method for Tesla, drove Bitcoin and its second in command, Ether (ETH/USD) to a series of consecutive fresh record highs, allowing the cryptocurrency market cap to rise above the $2 Trillion mark for the first time.

However, Elon Musk’s swift change in tone raised concern when the ‘Dogefather’ announced his decision to stop accepting Bitcoin for Tesla vehicles amid environmental concerns. As prices factored in the probability of Musk selling his large $1.5 Billion stake, markets tumbled, as panic stricken investors flocked to exit positions.

In addition to this, Michael Burry’s ‘Big Short’ on Tesla combined with inflationary concerns addressed in in the FOMC Meeting minutes, have further exacerbated the plunge, which initially wiped out approximately 50% of this year’s gains before making an impressive come-back, recovering approximately 43% within an 4 hour period. 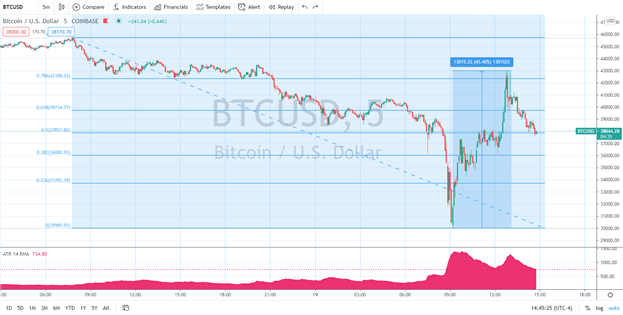 The move may appear to be extreme but it looks a lot like last year’s crypto sell-off (on the right) which may insinuate that a shift in risk appetite prior to the FOMC minute meeting as a primary catalyst for the extreme volatility around the to digital currency.