The Mexican Peso was largely unfazed by today’s interest rate decision from the Bank of Mexico, which saw the Mexican central bank hold its benchmark rate at 4.00%, as widely expected according to a Bloomberg survey. Despite rising prices in the economy, policy makers take the view that current inflation is only a temporary phenomenon, caused partly by base effects from last year’s Covid-induced impact on the global economy.

That sentiment echoes other central banks, such as the Federal Reserve. USD/MXN continued on its downward path following the conclusion of the 2-day Banxico meeting. A strong crude oil price has helped bolster Peso strength in recent months, as the Mexican economy relies heavily on the commodity’s export revenues. The latest CPI print was over double the 3% target in April.

Overall, the Mexican central bank appears to have moved into slightly less dovish territory. The next Banxico meeting on June 24 will likely give more insight into the next move, but as of now, it appears that another hold on rates will occur. Inflation prints and other price measures should be watched with a close eye, however. Stronger-than-expected inflation in the coming months could force the dovish policy as of late to be abandoned altogether. Some expect the first cycle hike to come later this year.

USD/MXN continued its drop after pinging its 100-day Simple Moving Average overnight. Since then, the currency pair has extended over a full percentage point lower. A near-term area of recent support at 19.8244 may underpin prices if further losses occur. The technical posture appears weak, with RSI and MACD both aiming lower. 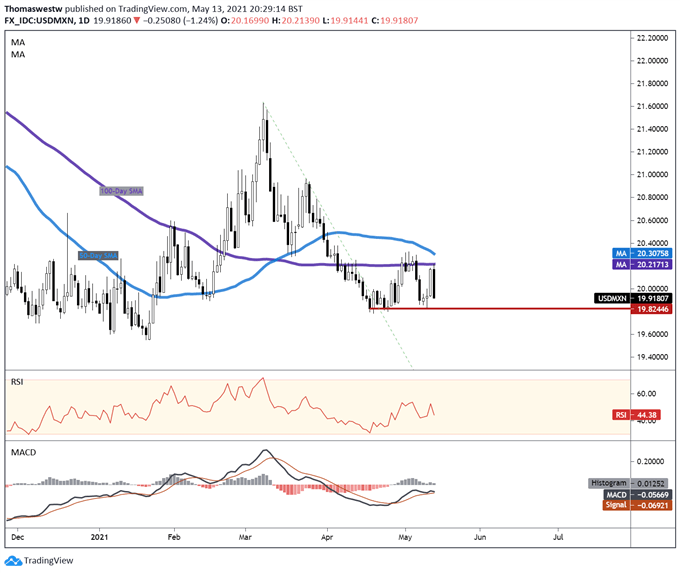