The cryptocurrency sell-off is accelerating in London trade with the market awash with double-digit losses. A market that seemed a one-way bet of late turned sharply lower earlier after cryptocurrency acolyte Elon Musk reversed his recent decision to accept Bitcoin as payment for Tesla cars, citing environmental concerns. Tesla earns valuable credits for their cars exceeding emissions and fuel economy standards, and it is a moot point if Tesla’s boss should have factored in the company’s emission ethics before he bought $1.5billion BTC earlier this year. Another Musk favorite, Dogecoin (DOGE) is down 20% so far today.

The daily BTC chart is now reversing its recent bullish sentiment with today’s sell-off low just above $46,000, the lowest print in 10-weeks. Today’s reversal also breaks the four sell-off/rally patterns seen the year, which indicates that a rally back to the $65,000 all-time high is becoming increasingly unlikely in the short-to-medium term. 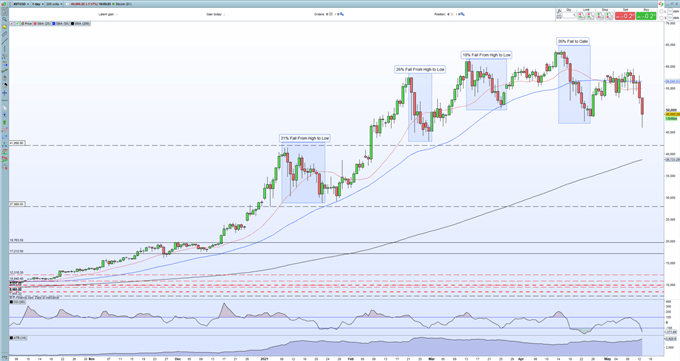 Ethereum, the market darling of late, is also under heavy selling pressure but continues to out-perform peer Bitcoin. The Ethereum/Bitcoin spread has rallied from a multi-month low around 300 on March 24 to a current level of 756, highlighting the out-performance of Ethereum. Bitcoin’s market cap dominance is now down to 42% from 70% at the start of the year, while Ethereum’s market dominance is up to just under 20%.

The Ethereum bull-run has also been stopped in its tracks and it remains to be seen if this is just a short-term move or the start of a longer period of consolidation. Leveraged accounts in the main cryptocurrencies will be on edge as the recent buy at any price sentiment may have turned, leaving further losses ahead. 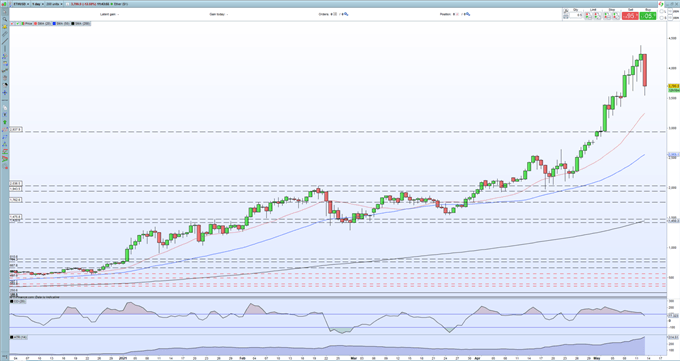 What are your views on Bitcoin (BTC), Ethereum (ETH), and the Alt-Coin Market – bullish or bearish?? You can let us know via the form at the end of this piece or you can contact the author via Twitter @nickcawley1.