The American Petroleum Institute (API) reported a 2.53-million-barrel draw in crude stockpiles for the week ending May 7th, compared to a forecasted decline of 2.1 million barrels. In the prior week, inventories dropped by 7.69 million barrels, underscoring rising fuel demand as economic recovery gathers pace. Since mid-March, total inventories have fallen by 17.6 million to 485.11 million barrels (chart below). 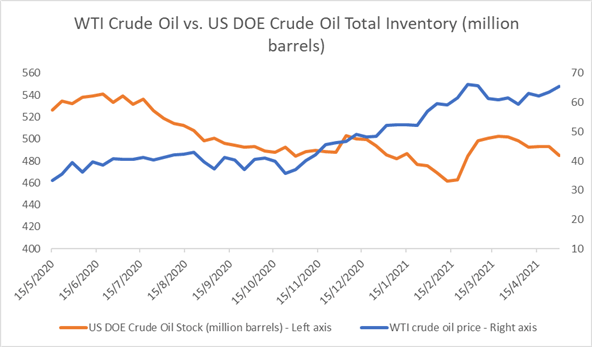 OPEC maintained its optimistic outlook for oil demand in a monthly report on Tuesday, saying that consumption will rise by 5.95 million barrels per day (bpd) in 2021, or 6.6% YoY. The energy demand outlook is brightened by eased lockdown measures in parts of the US and Europe, as well as strong recovery in China. This may help to offset the adverse impact brought by the pandemic in India and other parts of the world. Previously, the oil cartel decided at a meeting in early April to gradually increase production from May to July to meet rising demand.

A major US pipeline outage had a significant impact on fuel supply in the eastern part of the country. While gasoline stocks are running out in parts of the East Coast, some refineries in the Gulf area are forced to reduce processing rates as fuel inventories stock up. If the incident persists, it may lead to higher crude inventories in the days to come and undermine any boost from the summer driving season. Operators of the Colonial Pipeline will decide on late Wednesday whether it is ready to resume operating.

Looking ahead, traders are eyeing US headline and core inflation figures for clues about price levels and their implications on Fed monetary policy. The headline rate is forecasted to hit a ten-year high of 3.6% YoY. A higher-than-expected actual reading may lead the US Dollar to strengthen and probably weigh on commodity prices.

The Energy Information Administration (EIA) will report weekly inventories data later today. Markets anticipate a 2.10-million-barrel draw in stockpiles for the week ending May 7th. A larger-than-expected fall may serve to underpin crude oil prices, whereas a smaller one or rise would likely do the reverse (chart below). 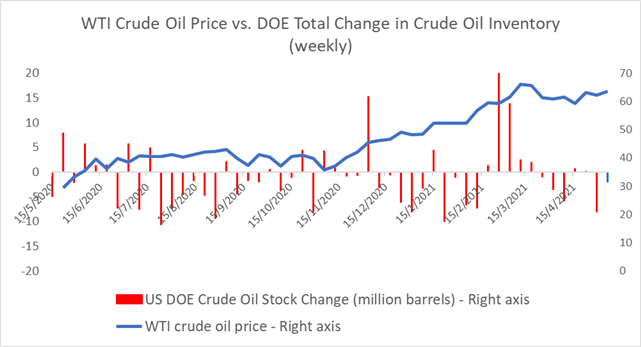 Technically, WTI is challenging a key resistance level at 66.50 – the 200% Fibonacci extension. A successful attempt would likely intensify near-term buying pressure and open the door for further upside potential. A failed attempt however, may result in a “Double Top” chart pattern that is inherently bearish in nature. The bearish scenario may lead to a technical pullback towards 62.19 – the 161.8% Fibonacci extension. Prices remain in an “Ascending Channel”, suggesting that overall trend remains bullish-biased. 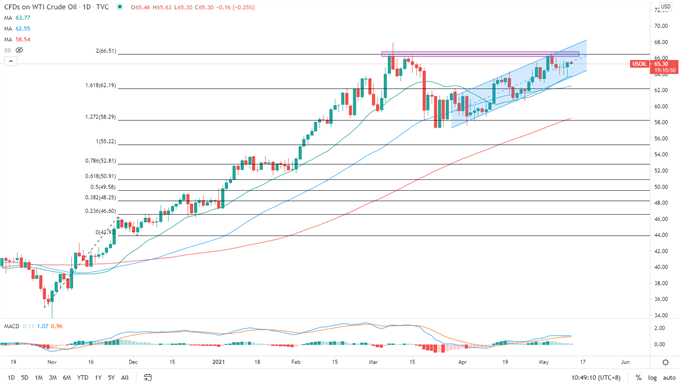