Selling in the technology sector pulled Wall Street equity benchmarks lower on Monday, with the Nasdaq 100 index tumbling 2.63%. Without much of news crossing the wires, market attributed this drastic selloff to inflation fears. Indeed, the 5-year breakeven rate – a key gauge of bond traders’ inflation expectations – have surged to 2.73%. This is the highest level seen since 2008.

Several factors are pointing to rising price levels, including rising wages, fiscal stimulus hopes and higher commodity prices. April’s nonfarm payrolls report showed that average hourly earnings surged 0.7% MoM to $30.17 – an all-time high. This is due to labour shortage as employers struggled to hire. A much lower-than-expected job gain in April increased the odds for the Biden administration to push forward another fiscal stimulus plan, which may be another inflation booster. The recent surge in commodity prices - especially crude oil, gasoline, iron ore and copper - added further inflationary pressures.

Therefore, Wednesday’s US headline inflation and core readings will be closely eyed by forex and equity traders. Market has already set high expectations for the (YoY) increase in the price levels, with the headline rate figure to hit 3.6%. If the actual reading comes in higher than expected, market could face another wave of volatility.

Inflation concerns reignited profit taking in the technology sector, which appears to be more vulnerable to rising rates. Tesla, ASML and Facebook were among the worst performers (chart below).

Asia-Pacific markets are facing a challenging day ahead. Futures in Japan, mainland China, Australia, Hong Kong, Taiwan and Singapore are in the red. Technology shares in the region could face severe selling pressure following a negative lead on Wall Street, whereas defensive sectors may show resilience.

The Nikkei 225 index traded 1% lower at open as the Japanese government decided to extend the state of emergency by another three weeks to May 31st. This will have a negative economic impact of 600 billion Yen in addition to the initial estimated 400 billion Yen, economists said. Meanwhile, a global shortage of semiconductors also put constrains on its manufacturing sector, especially in the auto industry. On the positive side, Japanese household spending surged 6.2% YoY in March, smashing expectations of 1.5%. This reflected strong domestic demand and may buoy consumer sectors in today’s trade.

Australia’s ASX 200 index retreated slightly on Tuesday after hitting an all-time high. Rising commodity prices led to strong gains across the mining sector, offsetting concerns surrounding political tensions between Australia and China. Iron ore prices hit a fresh record of US$ 215.48, and copper closed at a record of US$ 10,692on Monday. 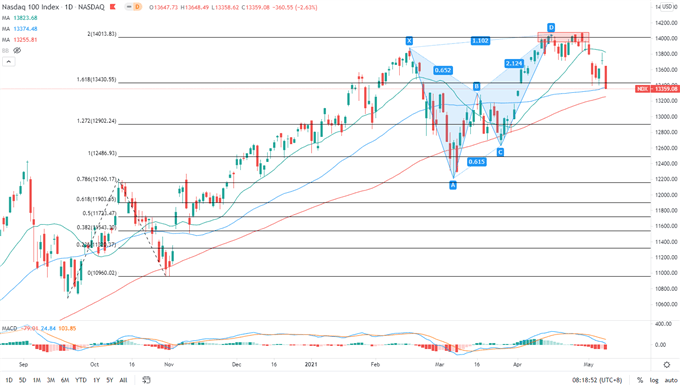 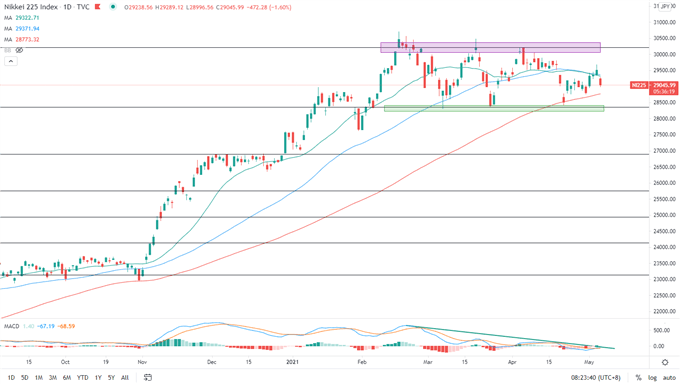 The ASX 200 index breached above a “Rising Wedge” yesterday before pulling back slightly. Prices also pierced through the 216.8% Fibonacci extension level, underscoring strong upward momentum. A daily close above this level may confirm the breakout and open the door for further upside potential with an eye on 7,200 – a psychological resistance. 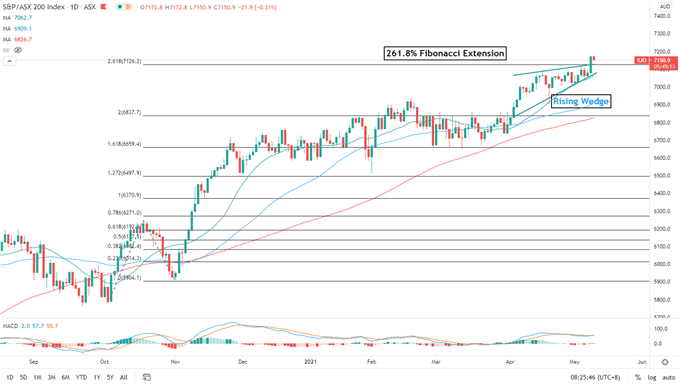