The big miss in April may be a temporary phenomenon as the economic recovery gathers pace. Labor demand remains robust but the supply appears to be strained, as reflected in a much higher-than-expected rise in average hourly earnings in April (+0.7% MoM).

The DXY US Dollar index fell 0.73% to 90.23 on Friday, the lowest level seen since February 26th. This reflected cooling expectations for Fed tapering. A weaker US Dollar boosted precious as well as base metal prices. It also makes emerging market currencies and assets more appealing. 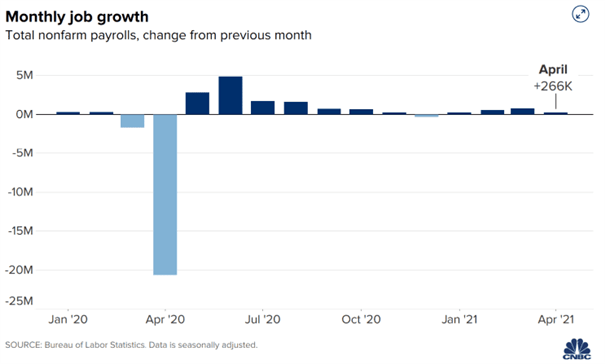 The US earnings season is coming to an end. Around 88% of S&P 500 companies have reported their Q1 results so far. Among those, more than 86% have reported actual EPS above estimates. According to data compiled by FactSet, the blended earnings growth rate for the first quarter is 49.4%, much higher than the previous forecast of 23.8%. In aggregate, companies are reporting earnings that are 22.1% above estimates, which is far above the five-year average of 6.9%.

Looking further ahead, analysts project double-digit earnings growth for the remaining three quarters of 2021, with a peak expected in Q2 at 59.5%. These above-average growth rates are attributed to both a faster pace of economic recovery and a low-base effect. 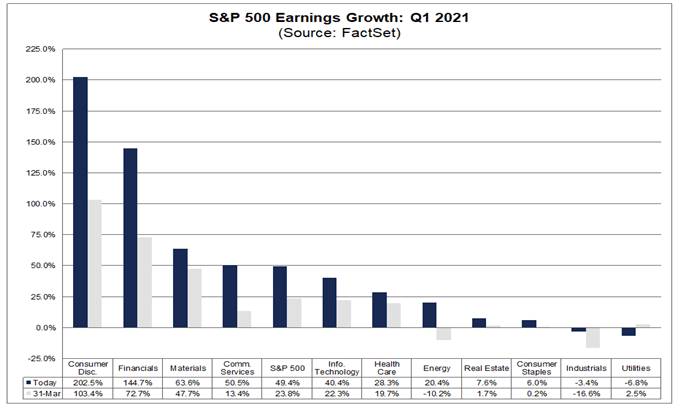 Asia-Pacific markets look set to kick off the week on the front foot. Futures in Japan, Hong Kong, South Korea, Taiwan Singapore and India are pointing to a higher start on Monday. Those in Australia and mainland China are in the red however, weighed by escalating political frictions between the two countries after China ‘indefinitely suspended’ high-level economic dialogue with Australia. Singapore saw a rising number of community Covid-19 cases recently, including a new cluster found at Changi Airport over the weekend. Tightened social-distancing measures kicked off on Saturday in an attempt to curb the spread of the virus.

Looking ahead, Chinese and US inflation rates lead the economic docket alongside US retail sales numbers this week. Meanwhile, oil traders will eye Wednesday’s API crude inventory data for clues about the supply and demand relationship. Find out more from theDailyFX calendar. 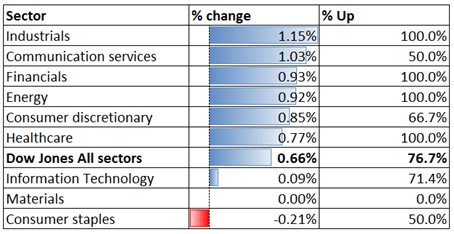 The Dow Jones index is attempting to challenge the 200% Fibonacci extension level (34,920) with strong upward momentum. A successful attempt to breach it would likely open the door for further upside potential with an eye on 36,000, whereas a failed attempt may lead to a pullback towards the 20-day SMA line. The index has formed an “Ascending Channel” since early November, the ceiling and the floor of which serve as key support and resistance levels respectively. The MACD indicator has formed a bullish crossover above the neutral midpoint, suggesting that upward momentum is prevailing. 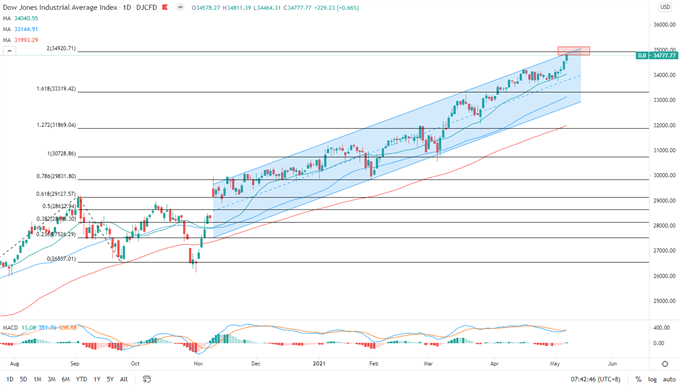 The Hang Seng Index (HSI) has been range-bound between 28,290 (the 78.6% Fibonacci retracement) and 29,344 (the 50% Fibonacci retracement) since early April. The 20- and 50-day SMA lines have turned bearish recently, potentially forming a “Death Cross” if they cross below the 100-day SMA line. The MACD indicator is hovering near the neutral midpoint, suggesting that the index is lack of a clear direction in the near term. 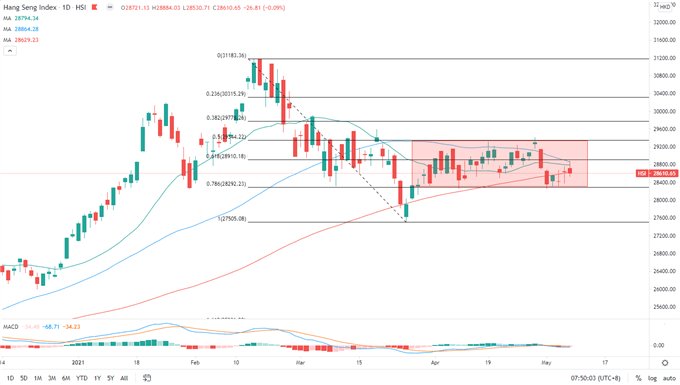 The ASX 200 index is attempting to test a key resistance level at 7,126 – the 261.8% Fibonacci extension. A firm breach above it would likely open the door for further upside potential with an eye on 7,200. The formation of a “Rising Wedge” however, hint at risk of a near-term pullback. The MACD indicator formed a bearish crossover and trended lower, suggesting that upward momentum may be fading. 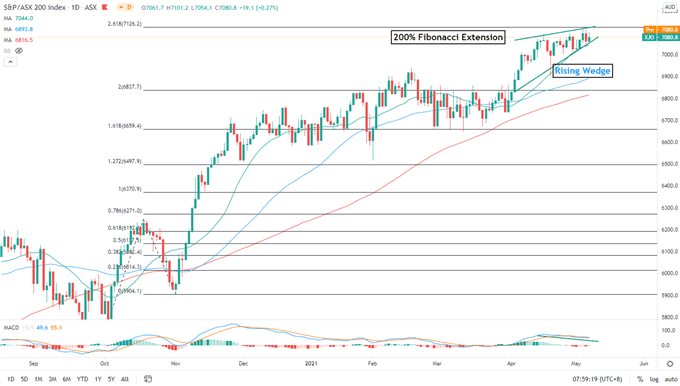