Crude oil prices edged higher during the Asia-Pacific mid-day session as a cyberattack caused a major US oil pipeline to stop running. The Colonial Pipeline is the largest US refined products pipeline system and can carry more than 3 million barrels of gasoline, diesel and jet fuel between the US Gulf Coast and the New York Harbor area. A rush for replacement fuel could emerge on the East Coast and potentially drive prices higher if the incident persists. The key question is how long it will take before the pipeline system resumes operating.

Gasoline stocks remained above the five-year average at the US Gulf area, so a prolonged shutdown may force refiners to reduce operating capacity. This could lead to a temporary increase in crude inventories despite strong demand.

Looking back at Friday, a much weaker-than-expected US nonfarm payrolls report sank the US Dollar. Oil prices were little moved however, as markets weighed tepid job growth and its impact on the fuel demand outlook. Nonetheless, a weaker US Dollar could still pave the way for oil prices to aim higher as they historically exhibit a negative relationship.

Besides, pandemic concerns remain on top of traders’ minds as viral resurgence troubles some of Asia’s top energy importers. India reported more than 400k new daily Covid-19 cases for four days in a row, and Japan saw infections climbing on Friday and Saturday. Recent data showed that crude imports and gasoline sales fell in these two countries due to travel restrictions and lockdowns. India and Japan are the world’s third- and fourth-largest oil importers respectively. In total, the two countries consumed around 17% of global oil exports during 2019.

New confirmed Covid-19 cases over the past 14 days

Looking ahead, traders are eyeing Wednesday’s US inflation data and Friday’s retail sales growth for clues about price levels and the health of consumer spending. Wednesday’s API inventory data will also be closely watched.

Technically, WTI is trending higher within an “Ascending Channel” on the daily chart. The pattern is characterized by consecutive higher-highs and higher lows, suggesting that overall trend is tilted to the upside. An immediate resistance level can be found at US$ 66.51 - the 200% Fibonacci retracement. WTI failed to breach this level in early March, potentially forming a “Double Top” chart pattern if it is unable to break through on a second attempt.

The MACD indicator is trending higher above the neutral midpoint, suggesting that bullish momentum is dominating. 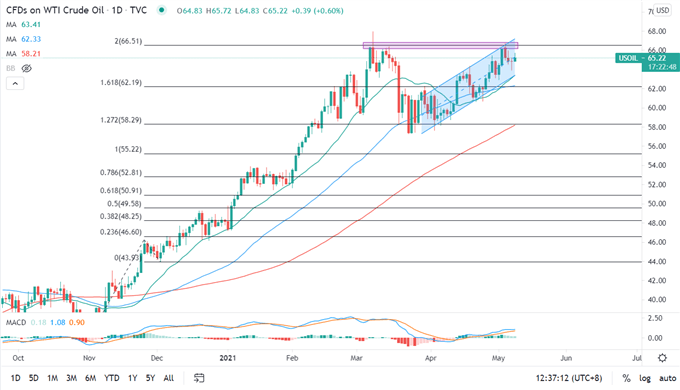