Bitcoin Rebounds Back Towards $60K, Dogecoin Continues its Upward Surge

Bitcoin prices have drifted lower since surging to fresh record highs on April 14, on the back of news that the US Treasury is opening an investigation into instances of money laundering using digital assets, and a blackout in the Bitcoin mining region of Xinjian in China.

However, the anti-fiat asset has held up relatively resiliently in recent days, as cryptocurrency custody firm NYDIG states that customers of several major US banks will be able to buy, hold and sell BTC through their existing accounts.

This indicates that the popular crypto is becoming more and more mainstream, and may open the door for prices to continue to recover in the near term. Dogecoin, the digital asset originally started as a parody back in 2013, has been a star performer in the cryptocurrency markets, surging 14,551% since the start of this year.

This relentless climb could be set to endure in the coming days, as market participants looks towards Tesla CEO Elon Musk’s weekend appearance on Saturday Night Live. The self-proclaimed “Dogefather” is expected to endorse the coin, which could intensify speculative exuberance. 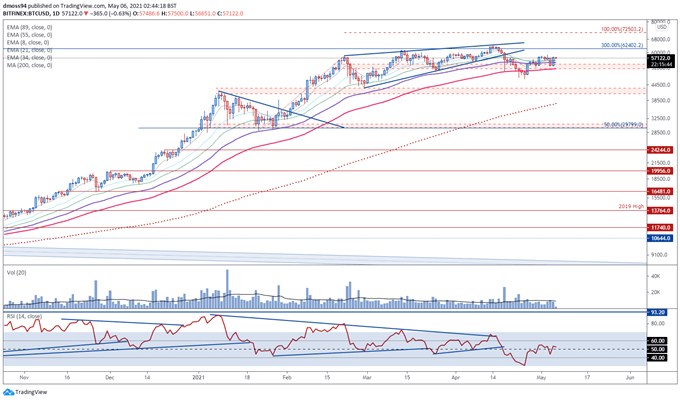 From a technical perspective, Bitcoin’s outlook appears relatively mixed as prices struggle to climb back above 60,000.

Fading volume during the recent rally, and the notable flattening of all three short-term moving averages, suggests that the path of least resistance may be lower.

However, a daily close above 60,000 could validate bullish potential and precipitate an impulsive surge to challenge the yearly high (64829). 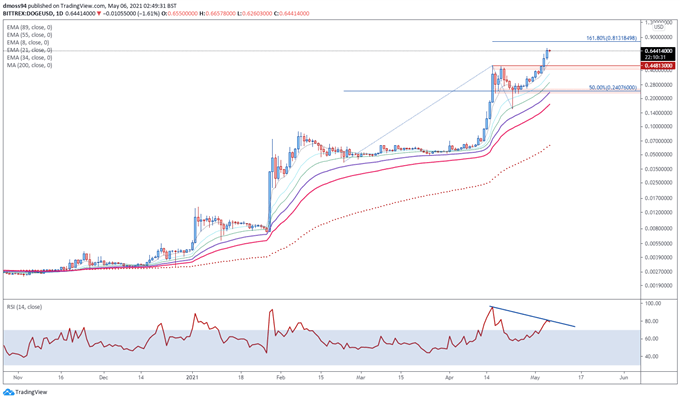 Bearish RSI divergence suggests that Dogecoin’s surge above the 0.60 mark could be running out of steam.

Failing to hold constructively above this psychological support level could open the door for a pullback to former resistance-turned-support at 0.448.