Crude Oil Prices Climb on Falling Stockpiles, Easing Lockdowns in the US and Europe

Crude oil prices hovered near two-month highs during Wednesday’s APAC trade after rising 2.55% a day ago. Prices are buoyed by a larger-than-expected fall in API crude inventories and reopening optimism in the US and Europe. WTI surged even as the DXY US Dollar index strengthened following Treasury Secretary Janet Yellen’s comment on interest rates, which spurred broad profit-taking overnight. This reflected strong upward momentum for oil as the demand outlook strengthened.

A surprisingly large draw in crude stockpiles reported by the American Petroleum Institute (API) boosted oil prices. Inventories fell 7.69 million barrels for the week ending April 30th, compared to a baseline forecast of a 2.35-million-barrel decline. In the previous week, 4.32 million barrels were added to stockpiles, versus a much smaller forecast of 0.66 million barrels. Gasoline and distillate stocks have also fallen by large amounts, underscoring rising fuel demand as economic recovery gathers momentum.

The energy demand outlook is brightened by eased lockdown measures in parts of the US and Europe, which helped to offset concerns about lower demand from India and Japan. British Prime Minister Boris Johnson said Covid-related lockdown measures will be scrapped in seven weeks as vaccine rollouts effectively brought down the number of infections in the UK. The European Commission has also proposed to member states to allow vaccinated people to enter the economic bloc. The upcoming summerdriving season may further boost fuel demand in the developed world and support oil prices.

While viral resurgence in Japanand India continue to threaten Asia’s recovery, the surge in infections has shown signs of abating. New daily cases in India have fallen for three days in a row, and the number in Japan has stabilized over the last two weeks (chart below). India and Japan are the world’s third and fourth largest oil importers respectively. Therefore, pandemic situations in these countries will be closely scrutinized by oil traders for clues about shifts in underlying demand.

Looking ahead, the Energy Information Administration (EIA) will report weekly inventories data later today. Markets anticipate a 2.00-million-barrel draw in America’s stockpiles for the week ending April 30th. A larger-than-expected fall may serve to underpin crude oil prices, whereas a smaller one or rise would likely do the reverse (chart below). 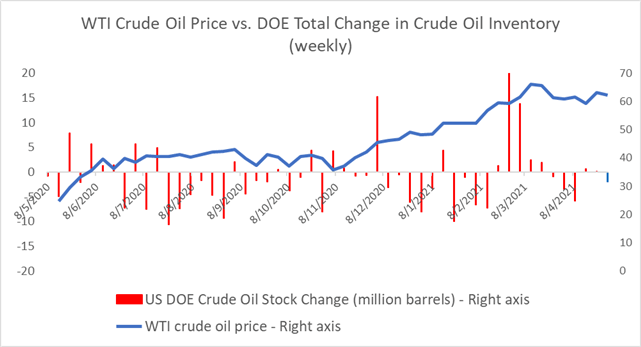 Technically, WTI is challenging a key resistance level at 66.50 – the 200% Fibonacci extension. A successful attempt would likely intensify near-term buying pressure and open the door for further upside potential. A failed attempt however, may result in a “Double Top” chart pattern that is inherently bearish in nature. The bearish scenario may lead to a technical pullback towards 62.19 – the 161.8% Fibonacci extension. The MACD indicator is trending higher above the neutral midpoint, underscoring upward momentum. 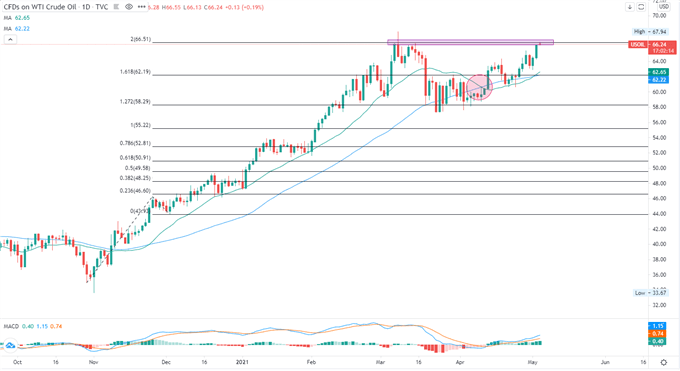