Pandemic concerns remained on top of traders’ mind as viral resurgence troubled some of Asia’s top energy importers. Japanese crude oil imports fell 25% in March to 2.34 million barrels a day, according to government figures. The country faced extended state-of-emergency measures as viral resurgence hit Tokyo, Osaka, and several prefectures. Travel activity was curbed as a result, with Japan Airlines and Nippon Airways cutting thousands of domestic flights subsequently. Reduced domestic travel and a halt of non-essential businesses could bring a considerable impact to energy consumption during the restricted period.

India is suffering a rapid surge in Covid-19 infections since early April, with daily new cases surpassing 400k at the end of the month. Not surprisingly, the country’s gasoline sales fell to the lowest since August, and diesel sales also declined, according to preliminary data. India and Japan are the world’s third- and fourth-largest oil importers respectively. In total, the two countries consumed around 17% of global oil exports during 2019.

On the positive side, China may see booming oil demand during the Labour Day holiday from May 1st to 5th as travel activity fuels petrol consumption. The pandemic situation has largely been brought under control domestically, allowing citizens to travel freely during the holiday season. According to travel service website Trip.com, hotel and flight bookings during this year’s Labour Day holiday have surpassed the same period seen in 2019. 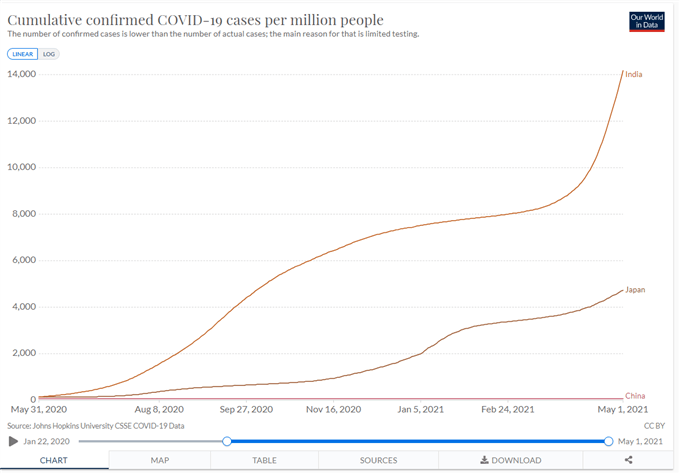 Looking ahead, today’s release of US ISM manufacturing PMI data will be closely eyed by traders. A stronger-than-expected reading could boost risk appetite and buoy oil prices. On the flipside however, it may also spur tapering fears and lead the US Dollar to strengthen, which could exert downward pressure on commodities. Wednesday’s API inventory data will also be closely watched by oil traders for clues about the supply-demand relationship.

Technically, WTI formed an “Ascending Channel” on the daily chart. The pattern is characterized by consecutive higher-highs and higher lows, suggesting that overall trend is tilted to the upside. An immediate resistance level can be found at US$ 63.83 - the 61.8% Fibonacci retracement. An immediate support level can be found at around US$ 62.57 – the 50% Fibonacci retracement.

The MACD indicator is trending higher above the neutral midpoint, suggesting that bullish momentum is dominating.