After breaking above the pre-pandemic highs in November and climbing above the 30,000 level for the first time, the Dow Jones continued its upward journey in 2021. Volatility-related hiccups in late January and early March were quickly brushed to the side as the Dow climbed higher, hitting the 34,000 level for the first time in mid-April. Since then, the Dow has traded mostly sideways, remaining between 33,700 and 34,200. 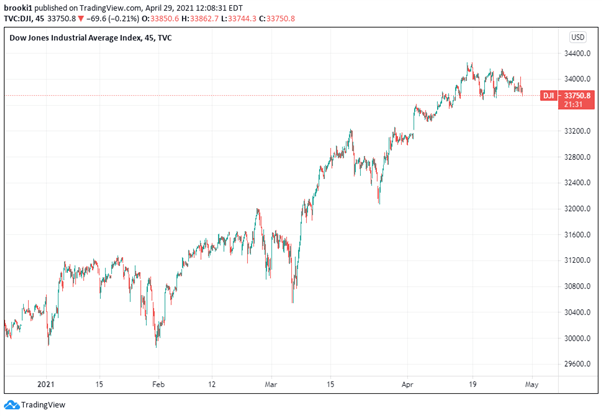 The lack of further upside in the Dow has translated to quiet on the ETF flows side. DIA, the leading ETF for the Dow Jones Index, saw its largest inflow since January in mid-April alongside the fresh all-time highs. Since then, moves in the ETF have consistently been inflows. However, the size of these inflows are miniscule compared to those seen earlier in the year. The Dow may need a further catalyst such as progress on an infrastructure bill or notable positive developments on the economic reopening front to drive another round of ETF buying. 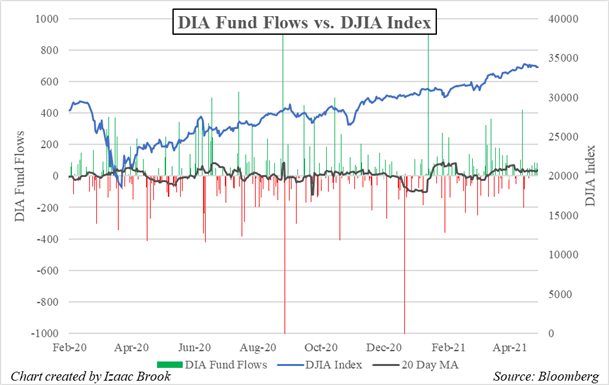 Since hitting its highest level since the financial crisis in March of 2020, the Volatility Index (VIX) has worked its way back downwards, with a number of spikes during various episodes of market concern such as the election and the GME short-squeeze. The VIX dropped below the 20.00 level in mid-March for the first time since February 2020 and has mostly remained there since. 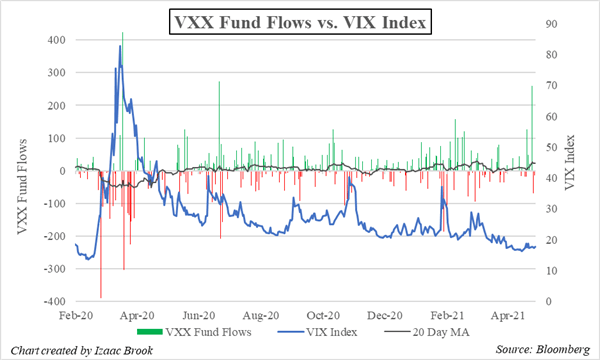 Despite the continued decline in the VIX and a lack of recent volatility in financial markets, the VIX ETF VXX saw its largest one-day inflow since the summer of 2020 ahead of the FOMC meeting. With the VIX so low yet considerable economic uncertainty remaining, it may not be so surprising that investors are looking to bet on heightened volatility in the future. However, if traders were expecting the FOMC to unleash a bout of market volatility, they were certainly disappointed.

The FOMC left policy unchanged and offered little to nothing new in the form of updated guidance, prompting little reaction from the markets. Longer term Treasury yields have been on the rise again this week following their decline from the late March highs. After trading around the 2.25% level last week, the 30yr Treasury yield moved higher in anticipation of and following the FOMC meeting. Following the meeting, the 30yr yield hit the 2.34% mark, its highest point in over two weeks. 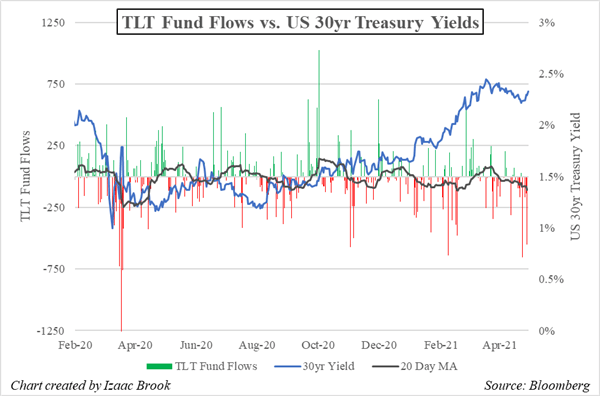 The TLT ETF, which tracks a portfolio of 20+ year Treasury bonds, has seen considerable outflows in recent weeks. The ETF saw large withdrawals in February as yields moved sharply higher. Ahead of the FOMC meeting, investors began to pull money from the fund again.

On April 23rd, TLT saw its largest one-day outflow since the height of the Treasury market turmoil in the spring of 2020. Other large redemptions occurred throughout the week, with one of the largest on record occurring the day of the FOMC meeting. With tapering likely on the horizon and no adjustments to the maturity of the Fed’s current purchases, longer-term Treasuries and related ETFs may see further selling pressures in the near future, which could see yields tick higher.