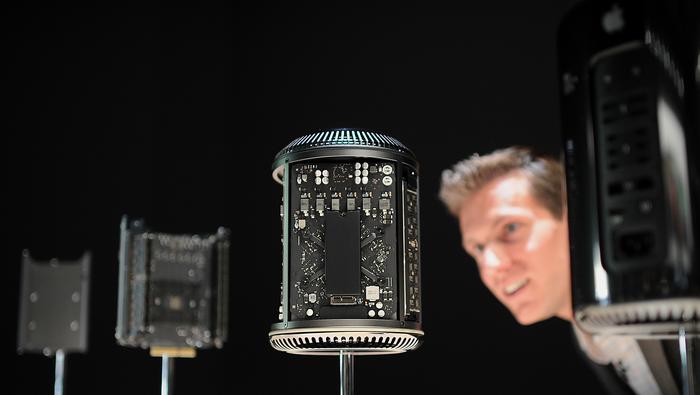 The S&P 500, Nasdaq 100 and Dow Jones closed slightly lower Wednesday despite encouraging remarks from Federal Reserve Chairman Jerome Powell during his post-FOMC press conference. Doubling down on the central bank’s current policy path, Chairman Powell reduced a threat to risk assets for the time being which may allow the US indices to enjoy continued strength as a result. Alongside commentary from Jerome Powell, outstanding earnings from two behemoth technology companies, Apple and Facebook, should see sentiment remain intact into the tail end of the week.

To that end, progress to the topside has slowed in the US indices as seasonal headwinds combine with substantial event risk to create rather subdued price action. With the Federal Open Market Committee meeting out of the way, investors can look to follow through on the share price reactions following recent quarterly reports in which Apple and Facebook revealed why they deserve to be on top of the S&P 500 and Nasdaq 100.

Apple announced remarkable earnings for the quarter with beats on both top and bottom lines. Surpassing revenue estimates by more than $12 billion, Apple displayed why it commands the largest market capitalization on the S&P 500. A $90 billion increase to its share buyback program will see further value returned to shareholders and the opening of a new plant in North Carolina suggests the company is not looking to rest on its laurels anytime soon. 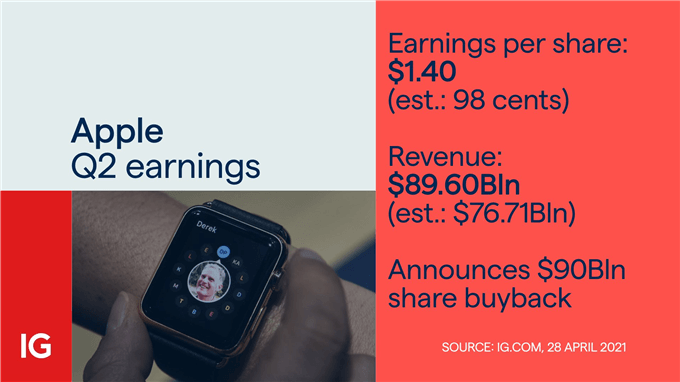 All in all, Apple executed a remarkable quarter that offers an encouraging outlook for the behemoth technology stock in the months to come as the global economy continues to reopen. In the immediate aftermath of the earnings release, Apple shares climbed more than 3%. To put Apple’s size and performance into perspective, the $90 billion buyback expansion is larger than 400 S&P 500 components according to Bespoke Investments.

While Apple may have had the better quarter, Facebook enjoyed a larger jump in its share price after revealing a similarly remarkable performance. Beating both top and bottom line estimates along with a huge jump in its operating margin, Facebook shares surged more than 6% higher in after-hours trade. Together, the two tech companies account for roughly 15% of the Nasdaq 100 and should help buoy price in the event of risk aversion later this week. 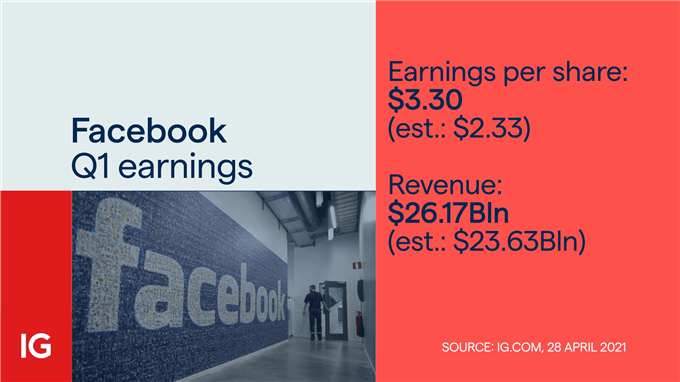 With many of the largest technology earnings behind us, traders and investors will look to results from Amazon due Thursday to round out the FAANG group. Thus far, results have been incredible and share price reactions have been similarly upbeat aside from Microsoft. Together, the largest technology companies seem to be doing their part in driving further price gains in the indices. As earnings season continues, follow @PeterHanksFX on Twitter for updates and analysis.