Stocks on Wall Street gained modestly on Monday, with the S&P 500 index hitting a fresh record of 4,187.6. Positive earnings surprises underpinned market confidence, offsetting the impact of US durable goods orders that came short of expectations. Traders will keep a close eye on the BoJ’s interest rate decision as well as the two-day FOMC meeting for clues about monetary policy guidance.

A soft DXY US Dollar index suggests that investors are anticipating a dovish-biased Fed despite a fairly strong economic rebound recently. In Japan, new state-of-emergency measures imposed in Tokyo, Osaka and two other prefectures may refrain the central bank from considering tapering any time soon.

Tesla released upbeat net income and revenue for Q1, but its share price dropped 2.7% as supply chain issued caused some delay in the delivery of the Model S sedan vehicles. Tesla reported net income of $438 million during the quarter, as well as earnings of 93 cents per share on $10.39 billion in revenue. This compared to market expectations of 79 cents earnings per share and $10.29 billion in revenue. The company also pocketed a $101 million positive impact from the sales of digital currency – presumably Bitcoin – during the quarter. 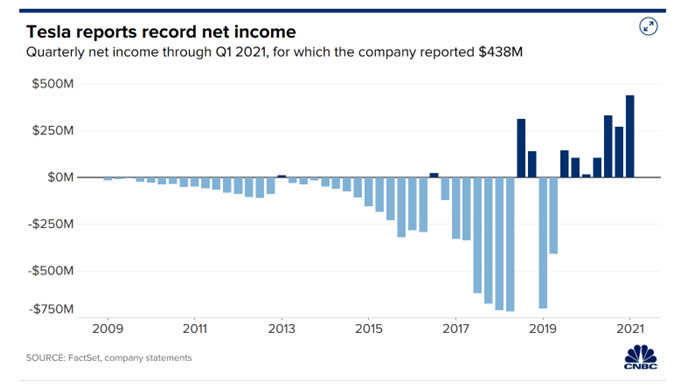 Asia-Pacific markets are positioned to open mixed. Futures in Japan, Australia, South Korea, Singapore, Malaysia and India are slightly higher. Those in Hong Kong, mainland China and Indonesia are in the red however. South Korea released a stronger-than-expected economic growth in the first quarter, setting a positive tone for its stock market at open. The GDP growth rate hit 1.8% YoY, compared to a 1.1% forecast.

Japan’s Nikkei 225 index continued to consolidate beneath the 30,000 mark as new lockdowns and a supply shortage of auto chips weighed on sentiment. Meanwhile, rising Covid-19 infections and slow vaccination progress domestically may cloud the prospect of an economic recovery.

Looking ahead, the BoJ interest rate decision headlines the economic docket alongside US consumer confidence index. Find out more from the DailyFX calendar. 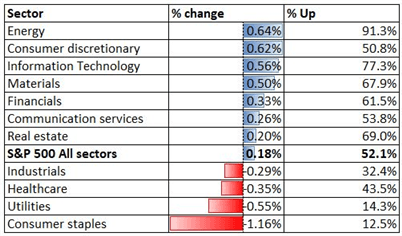 The S&P 500 index extended higher after rebounding from the 161.8% Fibonacci extension level (4,125). An immediate resistance level can be found at 4,268 – the 200% Fibonacci extension. The overall trend remains bullish-biased as suggested by the upward-sloped moving averages. The MACD indicator formed a bearish crossover and trended lower, suggesting that upward momentum may be fading. 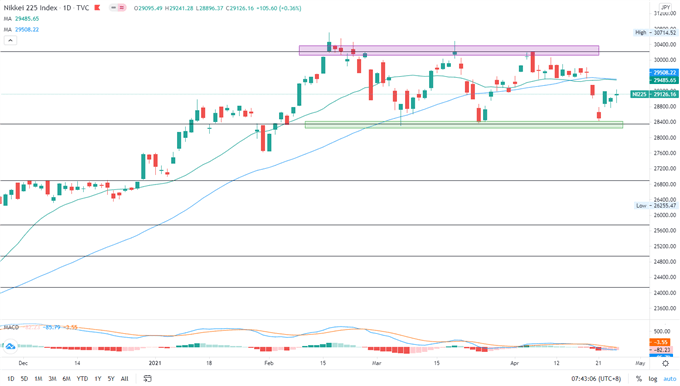 The ASX 200 index hit an immediate resistance level at 7,071 (the 100% Fibonacci extension) but failed to breach it. A pullback from here may lead to a test of the ceiling of the “Ascending Channel” that it broke previously. The MACD indicator is flattening, suggesting that buying pressure is fading and a technical pullback may be underway.