The earnings season continued to deliver positive surprises. Around 25% of S&P 500 companies reported their Q1 results so far. Among those, more than 84% have beaten market expectations. According to data compiled by FactSet, the blended earnings growth rate for the first quarter is 33.8%, much higher than the previous forecast of 23.8%. In aggregate, companies are reporting earnings that are 23.6% above the estimates, which is far above the five-year average of 6.9%.

This week, 173 S&P 500 companies, or 34% of the index’s constituents will release their Q1 results. Those include the bulk of the FAANG group of companies (Facebook, Apple, Google, Amazon) and other tech giants such asMicrosoft and Tesla(chart below).

Looking further ahead, analysts project double-digit earnings growth for the remaining three quarters of 2021, with a peak expected in Q2 at 54.6%. These above-average growth rates are attributed to both a faster pace of economic recovery and a low-base effect. Higher earnings are likely to lower price-to-earnings (PE) ratios for the three major indices, creating room for them to drive deeper into record territory.

Asia-Pacific markets look set to kick off the week in a positive mood. Futures across Japan, Australia and Hong Kong are in the green following the positive Wall Street lead. Australia’s ASX 200 index opened modestly higher, led by materials (+0.47%), information technology (+0.31%) and consumer discretionary (+0.14%) sectors, whereas healthcare (-0.01%) trailed behind.

In Hong Kong, stock connections have registered net southbound inflows for 6 days in a row, with total HK$ 29 billion entering the Hong Kong stock market from mainland China. This suggests that risk appetite has improved recently, potentially paving the way for a rebound in the Hang Seng Index (HSI). 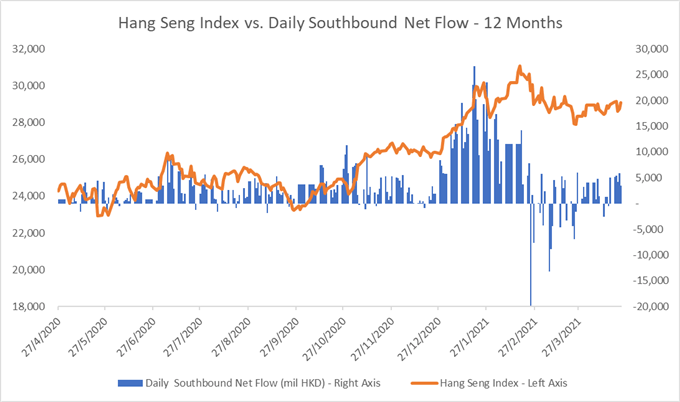 Looking ahead, the FOMC and BoJ interest rate decisions lead the economic docket alongside US GDP and Chinese manufacturing PMI data. Meanwhile, oil traders will eye Wednesday’s API crude inventory data for clues about the supply and demand relationship. Find out more from the DailyFX calendar. 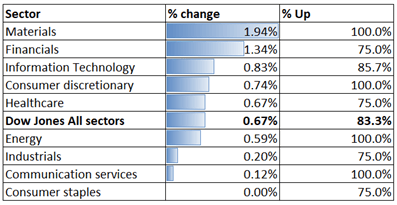 The Dow Jones index broke above the ceiling of the “Ascending Channel” and extended higher, underscoring strong upward momentum. The index is hitting an immediate resistance level at 33,954 - the 127.2% Fibonacci extension. A successful attempt would likely intensify near-term buying pressure and expose the next resistance level of 35,342 (the 161.8% Fibonacci extension).

The MACD indicator has formed a bearish crossover, suggesting that near-term upward momentum is probably fading.

The Hang Seng Index (HSI) remains in a consolidative mode within a narrow range between 28,334 and 29,290, which serve as immediate support and resistance levels respectively. The Bollinger Band width is narrowing, pointing to a lack of direction. The RSI oscillator is trending higher above the neutral midpoint, suggesting that bullish momentum is building.