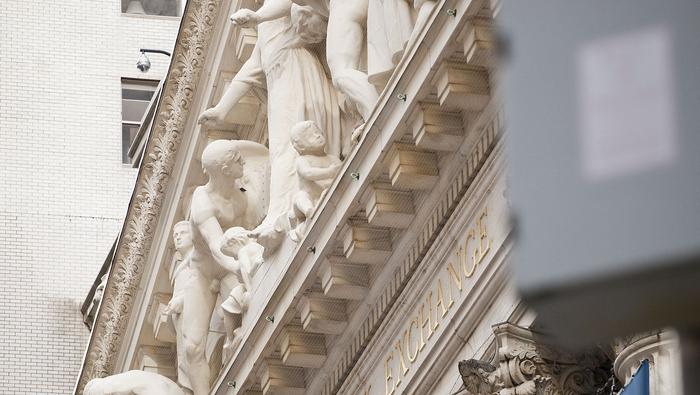 The S&P 500 Index rose to a fresh all-time-high in mid-April around the 4,180 level. As the week of April 19th began, the index dropped lower, falling back down to the 4,120 level before moving back higher on Wednesday. Q1 earnings reports continue to mostly be strong, and the brief bout of risk aversion seen earlier in the week may be nothing more than some profit taking at record levels. 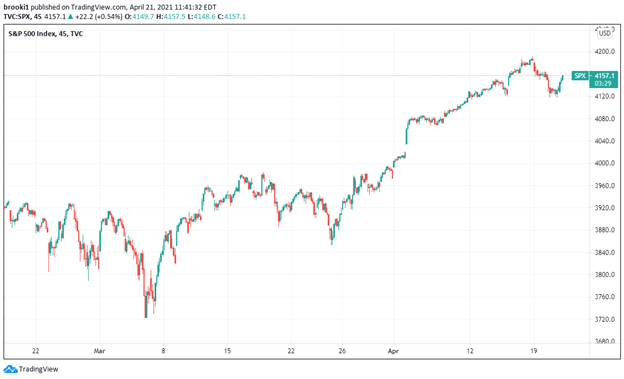 Earnings season kicked off with strong Q1 earnings beats from JP Morgan, Goldman Sachs, and Wells Fargo. Bank earnings have been boosted by strong trading revenues, reductions in loan-loss reserves, and better-than-expected US economic performance. Further strength looks to be on the near horizon as the economy continues to reopen. 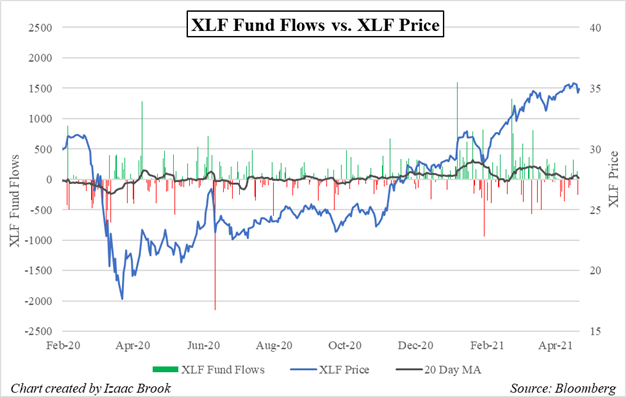 The XLF Financial Sector ETF rose to a fresh all time high alongside these strong earnings reports but since dropped slightly lower alongside the dip in the broader S&P 500 index. Meanwhile, flows into the ETF continue to remain subdued and mixed. The ETF saw large amounts of inflows in January, February, and March as US yields moved higher, but since peaking around 1.77% in late March, yields have fallen back lower.

With yields being a major driver of financial sector profit, a continued pause in moves higher or a retreat lower will threaten the financial sector’s ability to post similarly impressive numbers in Q2. 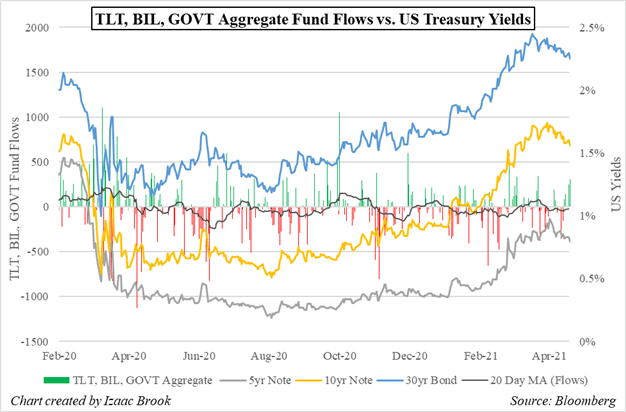 The pause in yield increases since late March has had a similar impact on Treasury ETFs. The aggregate fund flow for the ETFs TLT, BIL, and GOVT has remained mixed in 2021. After larger outflows in late February coinciding with the spike in yields, flows have remained relatively calm. The past few days have seen a concentration of inflows as yields have held mostly steady.

Since the end of Q1, negative sentiment on Treasuries has been falling, with market participations closing their short positions and going long instead. Future moves in Treasury yields will likely to tied to the path of the economic reopening and policy decisions from the Federal Reserve.

The Bank of Canada announced tapering of their QE purchases on Wednesday, and many suspect that the Fed will also embark on this path before year end. While the upcoming April FOMC meeting is likely too soon for language on tapering, June or July’s meetings may see such a discussion begin.