The Nasdaq 100 index futures extended lower during the APAC morning hours as Netflix delivered a much lower-than-expected subscriber growth in the first quarter. The company added 3.98 million subscribers in the first quarter, compared to a 6.29 million forecast. This also marked a sharp decline from 15.77 million new users seen in Q1 2020. Looking ahead, the company is forecasting only 1 million new users in the second quarter, a stark miss from the 4.4 million expected. Netflix’s share price tumbled 10% in afterhours trade, setting a negative tone for the Asia Pacific trading session.

Netflix’s earnings miss pointed to the risk that the rapid growth of technology companies during the pandemic era may have reached an inflection point, and their growth is expected to normalize as people gradually return to the office. The Nasdaq 100 index is facing a “reality check” as strong earnings growth has likely been baked into its lofty valuation. This rendered the index vulnerable to a technical correction should there be a slight miss.

Risk appetite appeared tilted to the cautious side. US Treasury notes rallied, sending the 10-year rate to a five-week low. The haven-linked US Dollar rebounded slightly, suggesting that demand for safety is rising. 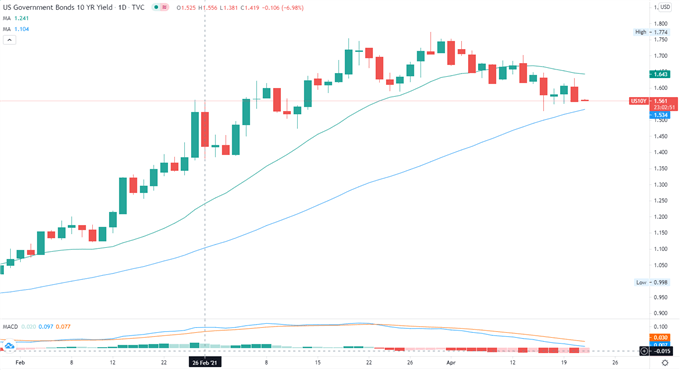 Asia-Pacific markets are facing a challenging day ahead, with futures across Japan, Australia, Hong Kong, Taiwan, Singapore, India and Indonesia pointing to open sharply lower. Profit-taking activity may be more intense among the cyclical sectors such as energy, financials, information technology and consumer discretionary, whereas defensive ones may fare better today.

The Hang Seng Index (HSI) looks set to pull back sharply on Thursday, with futures pointing to a 1.3% decline. Technology shares, such as Alibaba, Tencent, Meituan and Xiaomi, are among the more vulnerable names against the backdrop of a tech selloff in the US market overnight. Australia’s ASX 200 index looks set to fall for a second day as profit-taking activity ramped up.

On the macro side, UK inflation data headlines the economic docket alongside Bank of Canada’s (BoC) interest rate decision. Oil traders will look at weekly crude inventory report from the Energy Information Administration (EIA) for clues about the supply and demand relationship. Find out more from theDailyFX calendar. 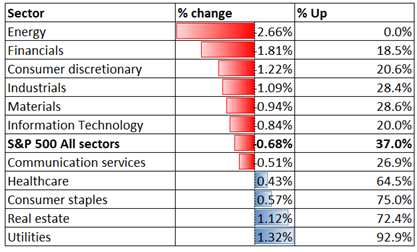 Learn about trading global equities
What Do Other Traders Buy/Sell Bets Say About Price Trends?
Register for webinar
Join now
Webinar has ended

The Nasdaq 100 index has likely entered a technical correction after hitting a record high at the end of last week. Near-term momentum has turned bearish as indicated by the MACD indicator. The index has likely formed an inverse “Head and Shoulders” pattern, which may serve as a strong bullish reversal indicator. The pattern suggests that there could be more room to go up after finishing the consolidation. An immediate support level can be found at the 20-day SMA line (13,645).

The Hang Seng Index (HSI) has likely formed an inverse “Head and Shoulders” chart pattern. There could be more downside room if the pattern completes. An immediate resistance level can be found at the 50-day SMA line (28,933), whereas an immediate support level can be found at 28,334 – the 23.6% Fibonacci retracement. The MACD indicator is trending higher beneath the neutral midpoint, suggesting that bullish momentum may be building.

The ASX 200 index retreated sharply from a multi-month high, underscoring strong selling pressure at around the 7,070 area. An immediate support level can be found at 6,906 – the 76.4% Fibonacci extension. The MACD indicator has formed a bearish crossover, suggesting that near-term momentum has turned downward.