The latest batch of UK CPI data showed a smaller than expected rise in the headline inflation rate in March, emphasizing that there’s no need for the Bank of England to tighten UK monetary policy short-term even as the economy recovers from the slump caused by the coronavirus pandemic. As the table below shows, inflation rose to 0.7% year/year from 0.4% in February but was a tad weaker than the 0.8% consensus forecast of analysts polled by the news agencies.

However, rises in the PPI numbers also emphasize that the central bank will need to rase rates eventually, showing higher than expected figures for both raw material and factory gate prices. 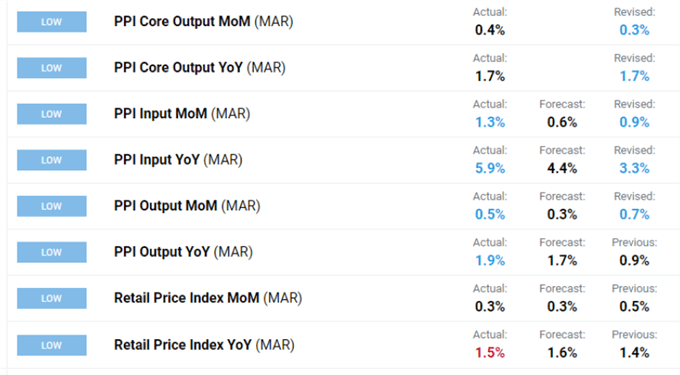 For now, market pricing suggests that UK interest rates will not be increased until September 2022 but the Bank is likely to withdraw some of its monetary stimulus before then, and that’s positive for GBP/USD long-term and negative for EUR/GBP. Note too that EUR/GBP could be weakened by political uncertainty ahead of German federal elections in September this year.

Recommended by Martin Essex, MSTA
How to Trade GBP/USD
Get My Guide

According to Bloomberg, just as Armin Laschet, the leader of Germany’s conservatives, won the nomination to lead his party into the elections, a fresh poll suggested that the bloc is quickly losing its dominance of German politics. The Forsa poll released by broadcaster RTL showed outgoing German Chancellor Angela Merkel and Laschet’s CDU party slump seven points to 21%, while the Greens gained five points to 28%. With a coalition of CDU and Greens seen as the most likely outcome in the fall, the Greens’ Annalena Baerbock may well succeed Merkel as chancellor, ending more than 15 years of center-right leadership in Germany. 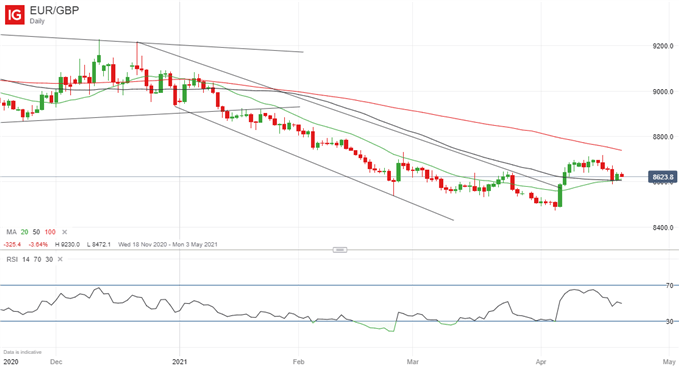