The S&P 500, Nasdaq 100 and Dow Jones retreated again Tuesday as the tailwind from strong bank earnings gave way to another wave of modest risk aversion. While stocks await another string of catalysts next week in the form of big-tech earnings, an abysmal quarterly report from Netflix will do little to repair sentiment in the interim. 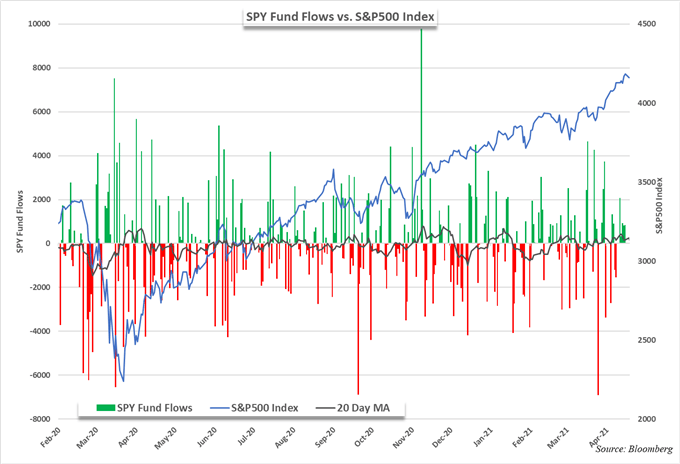 As a result, the current wave of selling could persist into the latter half of the week but fund flow data may suggest recent price action is on the back of profit-taking rather than an abrupt reversal in the longer-term trend. Either way, the broader uptrend in US equities remains intact and recent losses should be observed in the context of recent gains as days of declines see the major indices just points away from record levels despite the damage dealt to sentiment.

Nevertheless, risk aversion did show signs of spilling over into other assets as US Treasury yields slipped and the US Dollar creeped higher. Although recent price action may suggest otherwise, corporations have begun to report signs of inflation in various areas of the economy. Procter & Gamble, Coca-Cola and Kimberly Clark, among other companies, have announced rising input costs will be passed on to consumers which may reignite inflationary concerns that saw Treasury yields rise and technology stocks fall in the first quarter.

As it stands, the reflation trade has been put on pause – most recently evidenced by drastic declines in some industrial stocks – but fears may arise yet again nonetheless. Should they occur, weeks of jawboning from Federal Reserve officials may be undone and prior price trends may reemerge. That said, such shifts have yet to occur. In the meantime, follow @PeterHanksFX on Twitter for updates and analysis.