The University of Michigan’s preliminary consumer sentiment index for March printed at 86.5 vs. a forecast of 89.6, a disappointing result amidst consistent beats of expectations from other US economic data points in recent weeks. This print still marks the index’s highest point since last March, before the pandemic and related containment measures took effect. 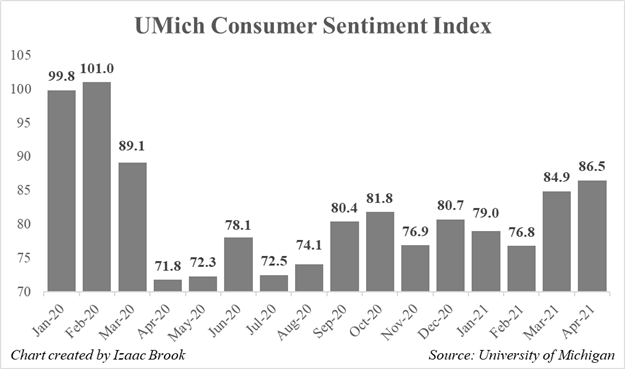 Friday’s prints are another example of the rising optimism surrounding the economic reopening. Boosted by the arrival of stimulus checks and other supportive measures from the Biden administration’s stimulus bill, retail sales in March printed at 9.8%, their highest level since May of last year. Initial jobless claims also fell to their lowest level since the start of the pandemic. The CPI for March printed above expectations as base effects from last year’s lows come into the equation, but inflation metrics remain far from the runaway inflation that some have predicted. As vaccination efforts continue, the US economy looks on track to return to some level of normalcy in the summer.

After rallying to a nearly five month high in March, the US Dollar has weakened again in April. The DXY peaked at 93.40 before slipping back downwards as the rise in Treasury yields stalled. The DXY has continued lower despite strong retail sales and jobless claims numbers earlier in the week, motivated by a similar drop in longer-term US yields. Ahead of the consumer sentiment print, the index was trading around the 91.60 level, at a one month low. 10yr yields were trading below the 1.60% level for the first time since mid March. 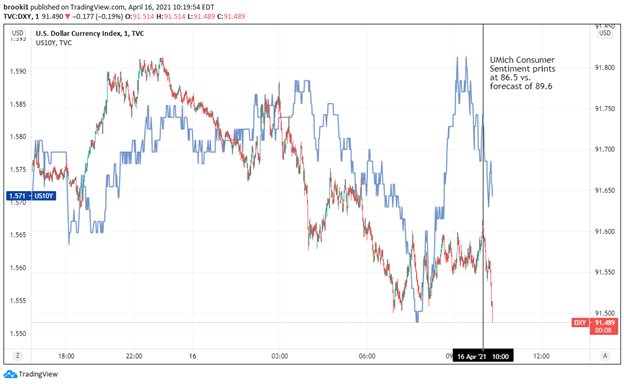 In the immediate aftermath of the print, both the DXY and 10yr Treasury yields dropped lower. The DXY fell to a fresh intraday low below the 91.50 level, hitting a new one month low.