Among the key focal points for the Australian Dollar over the next 24hours will be the latest jobs figures scheduled at 02:30BST. Expectations are for a 35k jobs gain, with the range of estimates from 10k to 60k. Given the strong employment figures in both the US and Canada, which has historically been a good indicator for Australian jobs data (last month also proving that point), risks look to be tilted to the upside for the upcoming jobs report. What’s more, weekly payroll jobs data has continued to show signs of improvement, alongside ANZ Job Advertisements, providing an encouraging sign for a drop in the unemployment rate. 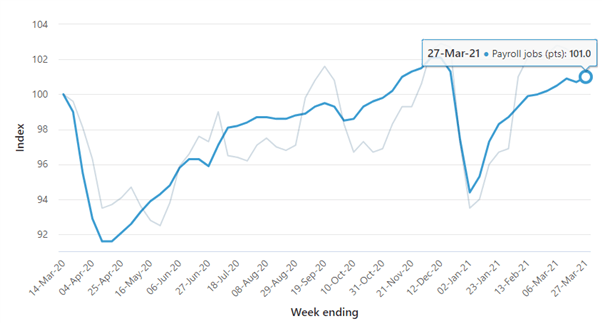 Taking a closer at AUD/USD the pair has broken above its descending trendline from the YTD peak, however, further resistance is ahead with the 50DMA situated at 0.7716. Should the Australian jobs data print a strong figure as I expect, I don’t rule out a move to 0.7765-70, but perhaps 0.7820 may be a stretch too far. However, should this be cleared, this opens up the doors for a retest of 0.80. On the flipside, key support resides at 0.7562 and thus a break below would be needed to reassert a bearish outlook on the pair for a move towards 0.74. 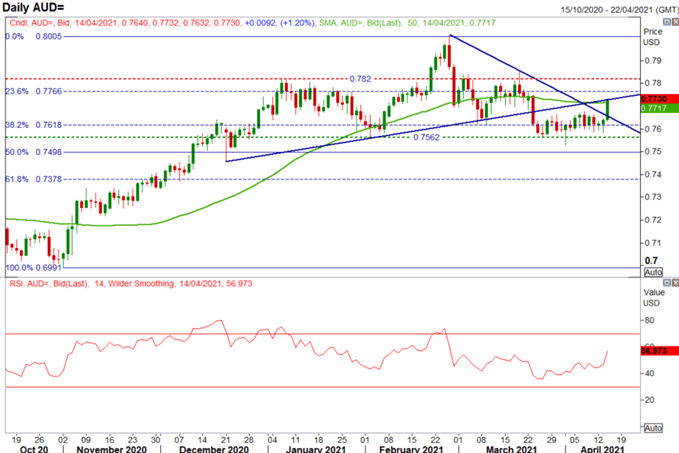 Can Bitcoin Provide a Leading Signal for FX?

If you follow me, you will notice that I rarely delve into cryptocurrencies. However, throughout the year, it has been gaining my attention more and more (as I am sure it has everyone else) with the reason being that Bitcoin could potentially be used as a leading signal for FX.

How? Well firstly, Bitcoin is a risk-on asset or in other words a liquidity haven, the pre-Covid idea that Bitcoin is a safe haven was well and truly debunked when Bitcoin and other cryptocurrencies cratered during the Q1 2020 sell-off. Thanks to global central bank and government largess cryptos have been among the top performers of the everything rally, therefore highly speculative assets such as Bitcoin can be treated as a liquidity barometer, much like how the S&P 500 can be used as a risk barometer for FX traders.

The chart below highlights that AUD/JPY, which is typically seen as the FX risk on/risk off barometer (High Beta vs Safe Haven), tracks Bitcoin pretty well, albeit with a slight lag and hence why I pose the question as to whether Bitcoin can be a leading signal for FX. Alongside this, with Bitcoins market cap now at 1.1trillion, up from 123bln a year ago spillover effects have increased. Going forward, I will continue to monitor this relationship to see if it holds significance. 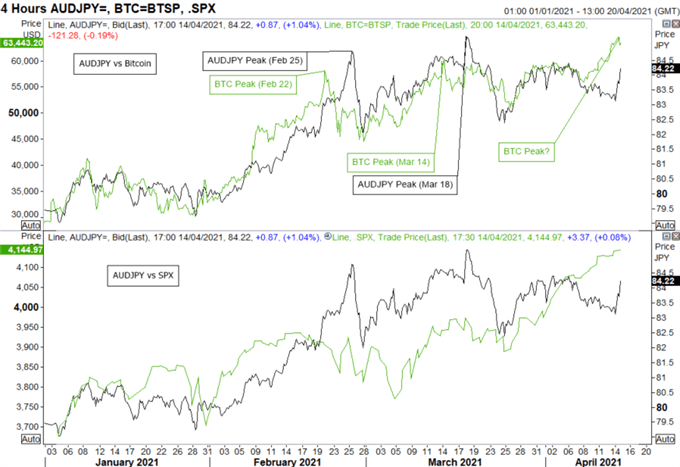 Note: As my colleague Rich Dvorak noted earlier in the week, AUD/JPY had been primed for a move higher amid the pick up in risk assets (full report)