After breaking above the symmetrical triangle identified in last week’s Bitcoin analysis, bulls and bears battled it out in an effort to gain control of the primary trend. Bitcoin bulls have dominated price action after setting yet another record high, above the key psychological level of $63,000.

With institutional interest supporting the upward trajectory that has prevailed since last year, the looming Coinbase IPO appears to be catalyzing Bitcoin price action, allowing bulls to achieve their seventh consecutive month of record highs.

Following breaking above the symmetrical triangle, bulls were able to drive the price of Bitcoin above prior resistance at the March 2021 high, which currently holds as support, allowing them to set another record above $63,000.

With price action trading above both the 8 and 20-period EMA, both the Commodity Channel Index (CCI) and the Relative Strength Index (RSI) continue to test the upper bounds of their range, indicating that BTC/USD may soon enter into overbought territory. 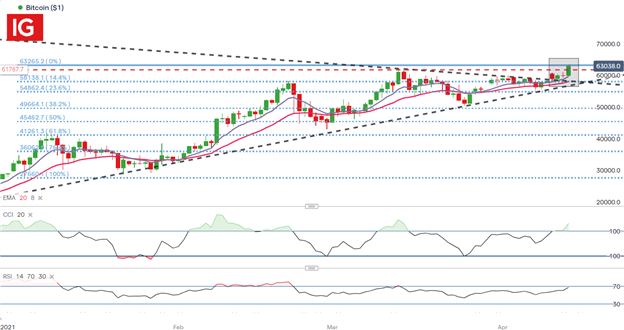 Although cryptocurrencies continue to face rigorous scrutiny by global regulators, crowd psychology and speculation remain the primary catalysts of crypto price action with numerous alt coins now beginning to outpace Bitcoin’s recent performance. Should this dynamic continue, bears may push the price of Bitcoin towards the psychological level of $60,000, which could act as support.

However, the 100% Fibonacci retracement level of the 2021 move along with the upward slope in the RSI & CCI may continue to hold Bitcoin bulls at bay, with the next level of resistance holding at $65,000.