USD/TRY, USD/ZAR, USD/MXN Key Levels Forecast for the Week Ahead

USDTRY: All eyes will be firmly fixed on next week’s Turkish Central Bank Rate Decision, marking the first meeting for the new governor, Kavcioglu, after his predecessor had been unexpectedly ousted following a larger than expected hike (200bps vs 100bps expected). Ahead of the meeting, President Erdogan has had his say, stating that he hopes interest rates to be cut to single digits. However, with the Turkish Lira down over 12% since March 22nd and with inflation rising to 16.2%, cutting rates will have to wait. This is in line with expectations with the policy rate expected to remain at 19%, keep in mind the new governor stated that markets should not take for granted that he will cut interest rates as soon as April, pledging that the policy rate will be above inflation. That said, should policy be left unchanged, the initial focus will be on the accompanying statement as to whether the central bank signals that they could embark on an easing cycle in the coming months. Should, however, the central bank surprise with a rate cut, a move 10 handle is not an unreasonable target in the short run.

The USDTRY 1 week volatility gauge has picked up as the tenor captures the CBRT decision and thus market participants can expect a volatile reaction. As mentioned previously, hints that a cutting cycle is on the way is likely to keep risks tilted to the downside with a move to 8.456 to be expected and the record high above. That said, should the central bank maintain its tighter stance this opens the door to a dip below 8%, however, risks remain tilted to USDTRY upside.

USDZAR: A strong showing of late for the South African Rand with the currency back within close proximity to its YTD peak against the USD.That being said, a slight recovery in the US yields has taken some off the shine from the Rand as we close out the week, while on the technical front, the RSI continues to trend higher. On the domestic front, there is little of note on the economic calendar, therefore, much of the focus will be on tier 1 US data and in particular the US CPI report. Taking a look at last month’s reaction to the data, USD/ZAR the pair saw initial losses of 0.6% before grinding lower by 1.2% in the following hour. While the headline rate printed in line with expectations, the core figure missed estimates, hence the push lower. However, should US CPI see a notable beat, then one can expect USD/ZAR to rip higher and given that we are trading around the YTD lows, risk-reward does favour an upswing with initial focus on 14.92.

USDMXN: Much like ZAR, broader market sentiment as well as key US data points will dictate price action in the Mexican Peso. Today’s attempt to push higher so far capped by the 100DMA and thus keeping the pressure on USD/MXN for a move towards rising resistance at 19.80 and with investors remaining net short on the Peso, this does increase risks towards a move to 19.80. However, as I have mentioned above, the US CPI release will be a key determinant as to whether the pair can get there or head back towards the 20.80-90 area. 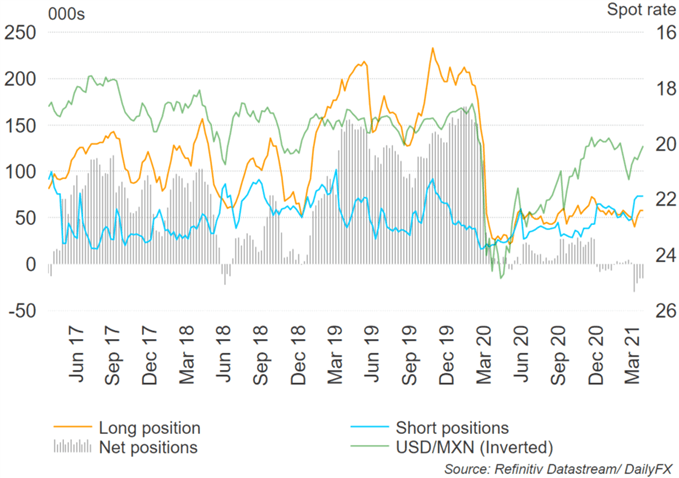