The Dow Jones and S&P 500 indexes hovered near record highs after the release of the March FOMC meeting minutes, which underscored the Federal Reserve’s dovish stance. The central bank will stick to its “outcome-based guidance” and will wait until the economy shows “substantial further progress” towards its full employment and inflation targets before considering tapering. The Fed intends to communicate well in advance of the time when progress could be judged “substantial enough to warrant a change in the pace of purchases”.

The minutes wrote “Since the January meeting, the date of the first increase in the target range for the federal funds rate implied by a straight reading of market pricing moved notably earlier to the first quarter of 2023, and the implied target rate at the end of 2023 rose around 50 basis points. However, responses to the Open Market Desk survey suggested more modest changes to policy rate expectations. The probability-weighted mean survey expectation for the target rate at the end of 2023 rose only around 5 basis points”. It suggests that the Fed officials are more tolerant to the prospects for a transitory rise in inflation and they may be more patient than markets thought.

Meanwhile, Treasury Secretary Janet Yellen revealed details of a tax plan to raise funds for President Joe Biden’s $2.25 trillion infrastructure plan, although skepticism remained on whether the bill could be passed in Congress.

The DXY US Dollar Index edged slightly higher alongside 10-year Treasury yields, suggesting that risk appetite is leaning towards the cautious side. The commodity-linked Australian and Canadian Dollars, as well as the Norwegian Krone, led the decline among their G10 peers. The VIX volatility index fell to 17.2, the lowest level seen since February 2020 before the Covid-19 outbreak hit the markets. Draining volatility underscores market confidence, but at the same time renders equities vulnerable to a technical pullback should negative surprises kick in. 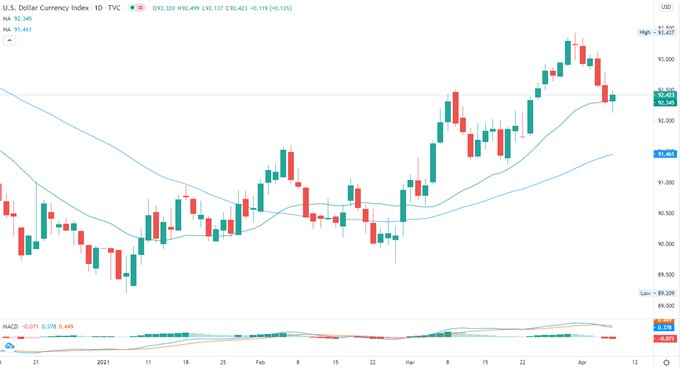 Asia-Pacific markets look set to open mixed on Thursday, with futures across Japan, mainland China, Hong Kong, Taiwan, Thailand and Indonesia pointing to trade lower, whereas those in Australia, South Korea, Singapore, Malaysia and New Zealand are in the green.

Australia’s ASX 200 index opened up by 0.66%, led by materials (+0.64%), information technology (+0.57%) and utilities (+0.45%) sectors, while healthcare (+0.01%) lagged behind. Japan’s Nikkei 225 index traded half a percent lower at open, extending a three-day decline as investors awaited consumer confidence data to be released later today.

Looking ahead, the ECB’s monetary policy account headlines the economic docket alongside the US weekly initial jobless claims data. Find out more from the DailyFX calendar. 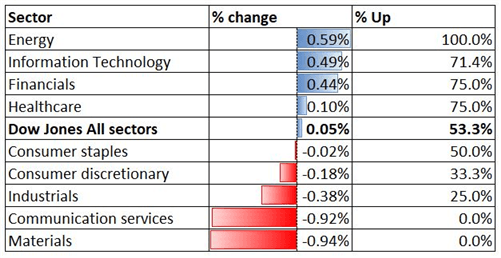 The Dow Jones indexbroke above the ceiling of the “Ascending Channel”, opening the door for further upside potential with an eye on 33,954 (127.2% Fibonacci extension). The overall trend remains bullish-biased, as suggested by the upward-sloped moving averages. A bearish MACD divergence however, suggests that a near-term pullback is possible. 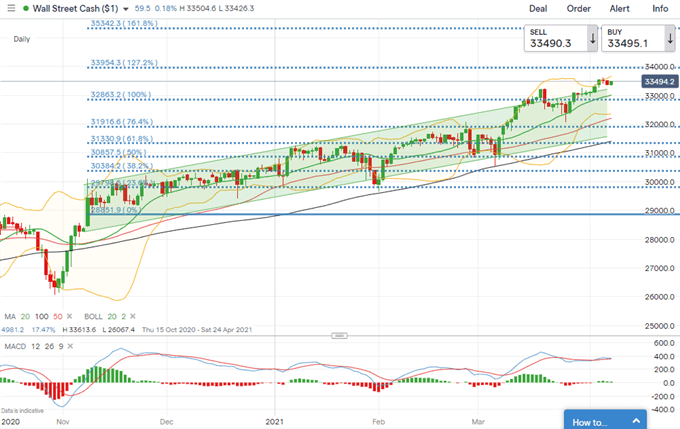 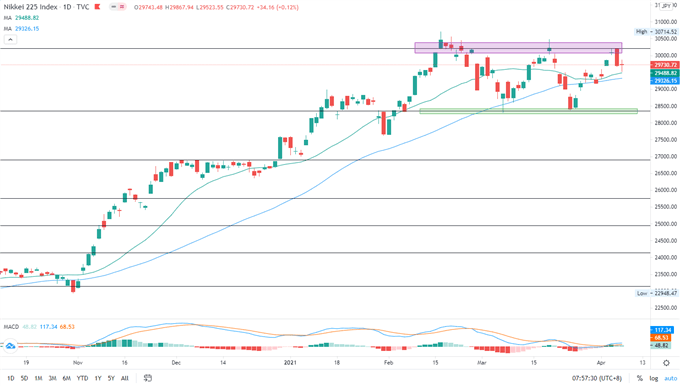 The ASX 200 index breached above the ceiling of the “Ascending Channel” that formed since the end of November, and thus opened the door for further upside potential. A daily close above 6,935 – the 200% Fibonacci extension level – would likely intensify near-term buying pressure and pave the way for further upside potential towards a psychological resistance at 7,000. The MACD indicator is trending higher above the neutral midpoint, underscoring upward momentum.