The Indian Rupee weakened as the Reserve Bank of India left its benchmark repurchase rate unchanged at 4.00% in April, as expected. The central bank also maintained its accommodative stance for as long as growth is secured. But, it also unveiled a 1 trillion Rupee government bond purchasing plan (via the secondary market) as the central bank reiterated its commitment to ensuring an orderly evolution of yield curves.

The Indian Rupee remains weaker than where it was at the start of February, particularly amid some gains in the US Dollar. Rising longer-term Treasury rates have been reverberating outward, even pushing the RBI to tame local rising yields. This has been fueling some volatility in Emerging Market equities, and India is no exception. The Nifty 50 sits around the same level as it was back in late January.

Currencies from developing markets can be quite sensitive to capital flows. So seeing INR under pressure should be unsurprising as investors adjusted portfolio allocations. But in addition to volatility risk, weakness in the Rupee may have also been due to the markets too aggressively pricing in a hawkish RBI at first – as expected. This is despite relatively dovish commentary from Governor Shaktikanta Das.

This was underscored recently when the nation reaffirmed the central bank’s 2 – 6% inflation target for fiscal year 2022 – 2026. So perhaps INR investors were disappointed that there was not a more aggressive approach. You can see this on the chart below, where I compared INR/USD versus the RBI implied rate one year out via forward curves.

With that in mind, continuing to keep an eye on Indian inflation data will be key. The next CPI report is due on April 12th. Inflation is expected to clock in at 5.45% y/y in March, up from 5.03%, but still within target. There may be room for USD/INR upside if RBI hawkish bets continue to slowly unwind, particularly given the recent resurgence in local Covid cases.

Recommended by Daniel Dubrovsky
Learn how to become a more consistent forex trader!
Get My Guide 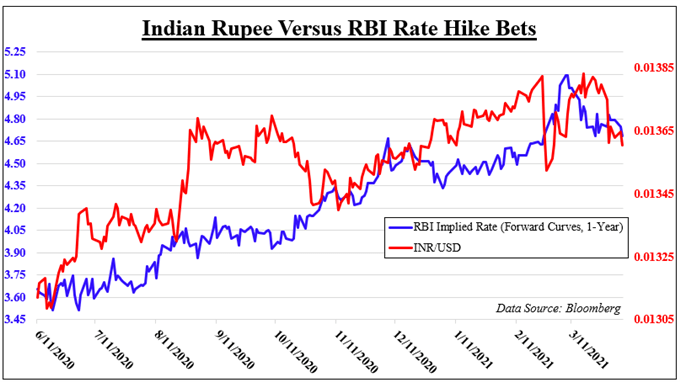 USD/INR is attempting to push above a familiar zone of falling resistance from March 2020. This has been maintaining the medium-term downtrend. At the same time, the pair recently bounced off long-term rising support from 2011. Pushing higher exposes key resistance at 74.1030 before opening the door to retesting November highs. A turn lower and subsequent breakout under 2011 support could open the door to revisiting lows from September 2019.