Wall Street equities closed broadly higher on Monday as investors cheered solid March nonfarm payrolls data, which underscored a rapid recovery in the labor market with the help of vaccine rollouts. Market sentiment was further boosted by a record reading in the ISM non-manufacturing PMI index, which came in at 63.7 versus a 59.0 forecast. It suggests that the service sector is rebounding at a faster-than-expected pace, echoing a large increase in service jobs in the nonfarm payrolls report.

The S&P 500 index surged 1.44% to a fresh record of 4,077.9, paving the way for further upside potential amid favorable macro data and hopes for a massive infrastructure stimulus plan. Tesla (+4.43%), Alphabet (+4.19%) and Facebook (+3.43%) were among the top gainers in the S&P 500 overnight, as tech shocks regained investors’ favor after recent selloff. The Nasdaq 100 index jumped 2.02% as it continued to recover from March’s low.

The DXY US Dollar index dropped nearly half a percent as an IFM report showed that the US Dollar’s share of global central banks’ reserves fell from 60.7% to 59.0% over 2020, extending its two-decade decline since 2001. On the other hand, the Chinese Yuan continued to gain share from a low base, with its portion in reserves rising to 2.3%.

Australia’s ASX 200 index opened up by 0.55%, led by information technology (+2.40%), materials (+0.88%) and industrials (+0.53%) sectors, while real estate (-0.03%) lagged behind. Traders are eyeing the RBA interest rate decision and monetary policy guidance on Tuesday. Market participants do not foresee any shift in policy despite a much stronger-than-expected Australian jobs report in March.

Japan’s Nikkei 225 index opened modestly higher on Tuesday after rising 0.79% a day ago. Japanese household spending fell -6.6% in February, more than earlier expectation of a -5.3% decline. This may weigh on sentiment as the Covid-19 “state of emergency” declaration in the Tokyo region since early January through end March appeared to have a larger-than-expected impact on consumer spending. 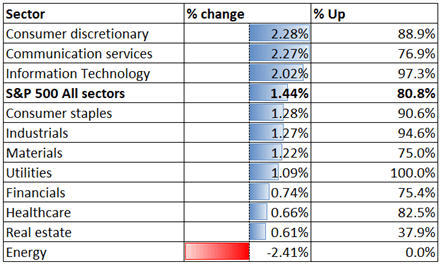 The Dow Jones indexextended higher towards the ceiling of the “Ascending Channel”, underscoring strong upward momentum. The index has also broken a psychological resistance level at 4,000 (the 127.2% Fibonacci extension) and thus opened the door for further upside potential with an eye on 4,125 (161.8% Fibonacci extension). The overall trend remains bullish-biased as suggested by the upward-sloped moving averages. The MACD indicator is trending higher above the neutral midpoint, suggesting that bulls are still in control. 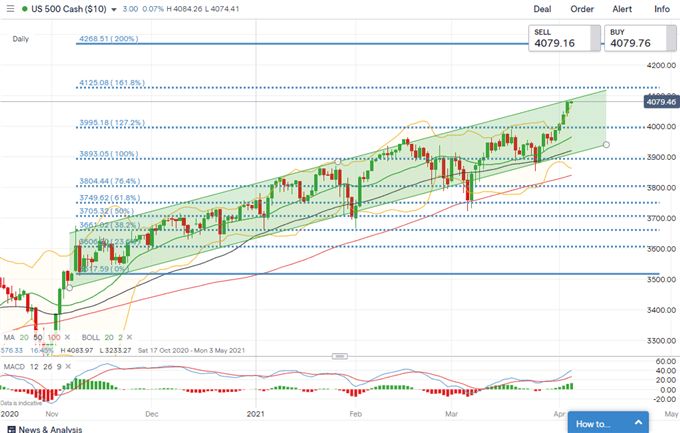 The Nikkei 225 index is challenging a key resistance level at 30,200 (127.2% Fibonacci extension), breaking above which would probably intensify near-term buying pressure and open the door for further upside potential. Another failed attempt however, may lead to the formation of a “Triple Top” chart pattern and thus a deeper pullback. The overall trend remains bullish-biased, as suggested by the upward sloped 20- and 50-day SMA lines. The MACD indicator is trending lower, suggesting that near-term momentum is tilted to the downside. 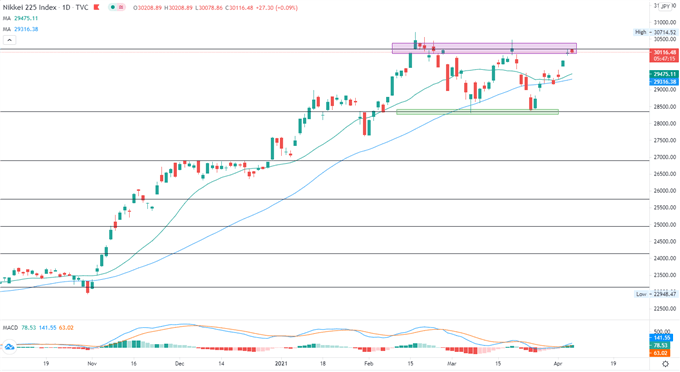 The ASX 200 index is testing a key resistance level at 6,935 (the 200% Fibonacci extension) and appears to be facing selling pressure here. A firm breakout may open the door for further upside potential and expose the psychological resistance of 7,000. The overall trend remains bullish as suggested by upward-sloped 50- and 100-day SMA lines. The MACD indicator formed a bullish crossover and has been trending higher since, pointing to upward momentum. 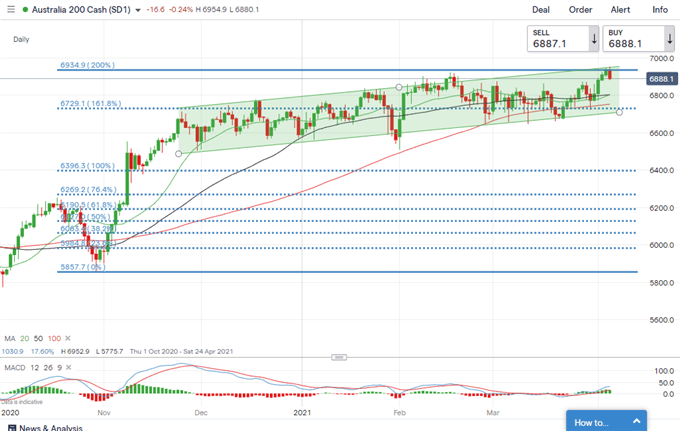