Recommended by Margaret Yang, CFA
Understanding the Core Fundamentals of Oil Trading
Get My Guide

Crude oil prices rebounded slightly during Tuesday’s APAC session as traders shrugged off fears about rising Iranian crude oil exports ahead of a nuclear talk held in Vienna. The meeting aims to bring both Iran and the US back to the 2015 nuclear accord, which was subsequently abandoned by former President Donald Trump. Strict economic sanctions, including limiting its oil exports, were imposed on the Middle Eastern country by the US since. Iran insists it can return to compliance to the nuclear deal only if the US backtracks and lifts those sanctions, while the Biden administration wants Iran to act first.

Although the chances of a deal to be struck any time soon appear thin, the start of talks ignited hopes for a potential return of Iranian oil to the global market. Iranian crude oil exports have declined sharply since the US tightened sanctions in 2018, falling from over 2.2 million bpd to 0.192 million bpd recently (chart below). That said, a full restoration of Iran’s output may add over 2 million bpd to global supply.

Prices are also facing a couple of headwinds, including larger-than-expected build in API crude inventories recently, the UK’s decision to extend foreign travel bans and a gradual unwinding of output cuts by OPEC+ members over the next three months. The viral resurgence in parts of the EU and a relatively slow vaccine campaign in the region further weighed on the energy demand outlook.

Looking ahead, the Energy Information Administration (EIA) will report weekly inventories data on April 7th, with market participants forecasting a 2-million-barrel decline in stockpiles. Recently, refiners are speeding up operations after extreme cold weather swept the country in February, gradually thawing inventories built during the cold blast (chart below). 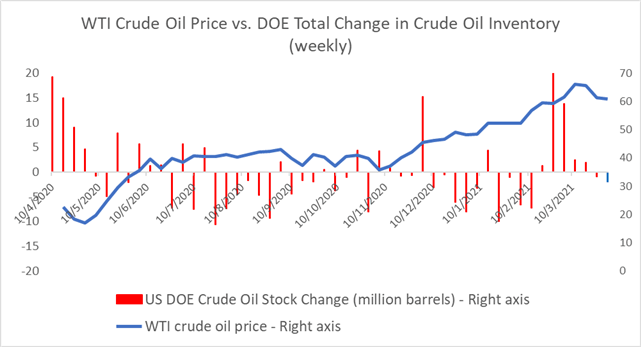 On the positive side, a much stronger-than-expected US ISM non-manufacturing PMI index echoed a large increase in service jobs in the nonfarm payrolls report, underpinning growth momentum of the world’s largest economy. Wednesday’s release of Markit service PMI prints in the Euro area and Thursday’s FOMC minutes will be closely watched too. 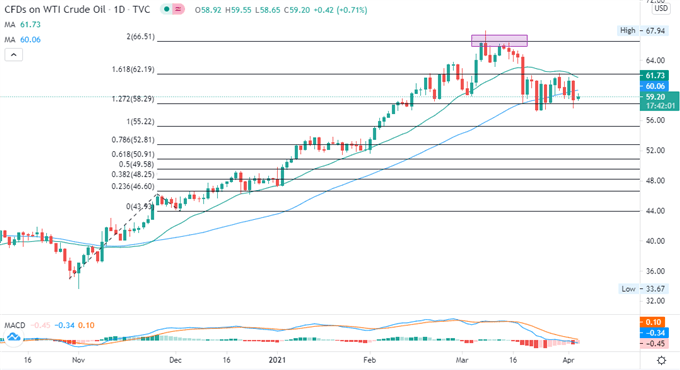 Technically, WTI retreated from the 200% Fibonacci extension level of 66.50 and entered a technical correction. A few large bearish candlesticks point to strong selling pressure and may signal a trend reversal. Prices broke both the 20- and 50-day Simple Moving Average (SMA) lines and are looking at 58.30 (127.2% Fibonacci extension) for support.

A daily close below 58.30 would likely intensify near-term selling pressure and carve a path for price to test a key support level at 55.22 (the 100% Fibonacci extension). The MACD indicator has formed a bearish cross over and is trending lower, underscoring downward momentum.